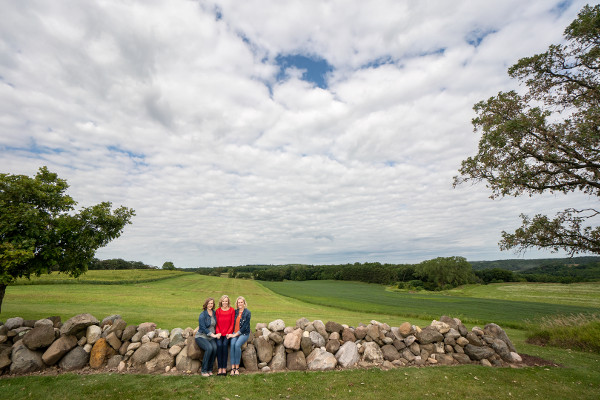 When they were just 19 years old, twins Lindsay Clark and Holly Muenchow already knew they wanted to make a difference in the world. They were both students at Carthage College in Kenosha, Wis., and noticed that organ and tissue donation was not on most students' radar. Lindsay was disappointed that a biology class she took didn't mention it, and there was no student organization that promoted the gift of life. So, the sisters petitioned the student government to create the organization Live. Love. Donate. Six years later, it is now a thriving 501(c)(3) nonprofit that has helped grow the organ donor registry in Wisconsin and raised thousands of dollars to support families of transplant recipients. "For us, there's no limit to how many people we can touch with organ donation," says Holly.

Lindsay and Holly had good reason to want to promote organ donation - it saved their father's life. Steve Muenchow received his first kidney transplant in 1991, just two years after he married their mother, Amy. She knew he suffered from kidney disease when she met him, and right after their honeymoon, he needed to go to the hospital. He went on peritoneal dialysis, which kept him alive, but his quality of life was very poor. "It was just so hard, but he was always positive," says Amy.

After receiving the gift of life, Steve's health improved remarkably - enough so that doctors gave them the green light to start a family. The twins were born in 1994, and Steve stayed healthy until 2006, when his new kidney began failing. He went on hemodialysis in October 2006, and in January 2007, Amy donated one of her kidneys to him. The twins were in 8th grade then, and remember every part of the experience - watching their father suffer and then seeing how much better he felt with his new kidney.

They carried that experience with them to college, which is why they worked so hard to create Live. Love. Donate. And when their father passed away in 2014 after a brief battle with lung cancer, they were even more motivated to continue what they had started. In addition to spreading the word about organ and tissue donation, the organization now hosts an annual golf outing that raises money for Restoring Hope Transplant House and the Mike Armbrust Transplant Fund at UW Health. The Mike Armbrust Transplant Fund provides financial assistance to transplant patients and their families by helping defray the cost of accommodations, travel and other unexpected, but related, expenses.

"We have seen firsthand how many lives our organization is touching," says Lindsay. "When you see that impact, it allows you to keep going and help countless numbers of people."