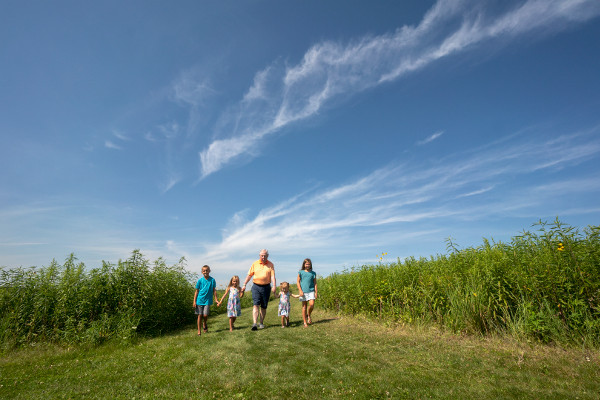 Ten years ago, Bill Lawton wasn't sure he would live past the age of 70. The Portage, Wis., man was diagnosed with liver cancer, and though doctors removed part of his liver, the cancer returned. When Bill, his ex-wife and his two daughters met with David Foley, MD, transplant surgeon at UW Health, Dr. Foley told them the only way Bill could avoid continual recurrence was to undergo a liver transplant. After receiving that news, all Bill could think about was his family. He didn't want to be a burden for his daughters, who were both pregnant with their first children. A transplant, he feared, would mean he could never be the kind of grandpa he had always dreamed of becoming.

Instead, the gift of life became his saving grace. Bill received a liver transplant on Sept. 14, 2013. Two weeks after the surgery, he walked one of his daughters down the aisle at her wedding. In the years since then, Bill has discovered that, with his new liver, there are no limits to what he can do. "When I had the first operation to remove part of my liver, I had no energy," he says. "I thought, well, this is how it's going to be for the rest of my life. When I had the transplant, it was just the opposite. I'm 75, and I feel like I'm 50."

Bill retired from his job as a salesman in 2018 and uses his newfound free time to hang out with his grandchildren. He likes taking his grandson to baseball games, and he drives from Portage to Verona, Wisconsin, to pick up two of his grandchildren from school several days each week. He visits the health club every morning, and as he works out, he thinks about his donor, who saved his life. He is determined to take good care of his body so he can continue to make use of his new liver.

"Sometimes I have to pinch myself because I never thought I would be able to do all that I am doing," he says. "I know I have a good story, and I hope it gives others hope."