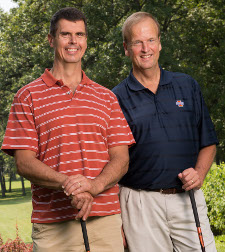 Brothers Jack and Gene Johnston of Illinois grew up having a close relationship. They share home projects, and enjoy golfing and taking Caribbean vacations together.

While on a recent vacation, Gene noticed that Jack's health seemed to be rapidly declining. Ten years earlier, Jack was diagnosed with alpha-1 antitrypsin deficiency, an inherited disorder that can ultimately lead to liver failure. In Jack's case, he was listed for a liver transplant. As Jack continued to wait, he experienced the growing effects of his illness, but did not ask his family to consider donating.

After returning home, Gene decided to pursue living donation. He reached out to Jack's transplant coordinator at UW Hospital and Clinics to inquire about becoming a partial liver donor, then told Jack.

At first, Jack was hesitant to accept Gene's generous offer, but he learned that Gene had received a very thorough evaluation, given the decision tremendous thought, and discussed it with Rebecca Hays, the program's living donor advocate.

"The staff was very focused on Gene's well-being and that was very important to me," says Jack. Gene also spoke with, and was reassured by, his surgeon, Luis Fernandez, MD, who would remove part of Gene's liver. "He really put me at ease and I felt confident," says Gene. In January 2014, the brothers had surgeries where Jack's liver was removed entirely and replaced by part of Gene's. 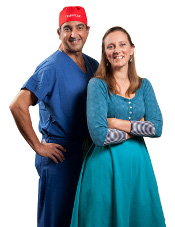 Only 250 live donor liver transplants are performed every year in the United States, and only a handful of institutions across the country have the expertise to provide results comparable to those of deceased donor liver transplantation. "At UW Hospital, we have a dedicated team with the knowledge and expertise to allow us to offer the option of living donation to patients with end-stage liver and kidney disease," says Dr. Fernandez.

Thanks to Gene's generous act, Jack is able to live a full life again.

"It's an honor to work with people like Gene, who make a decision to simply help a loved one live a better life," says Rebecca. She explains, "He became aware that his brother's symptoms and decline in quality of life were more severe than his status on the wait list indicated. There was a heightened sense of urgency in the family. This was a very special aspect of Gene's gift, because he was able to help his brother get a transplant much earlier in the disease process than Jack otherwise would have."

"Living donors tell us that they get tremendous satisfaction from giving life to another person who would otherwise have a very poor quality of life or might even die while waiting," says Dr. Fernandez.

Jack and Gene continue to enjoy golfing together and have even planned their next Caribbean vacation.