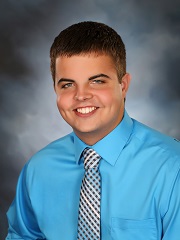 For teenagers 16 or older, it is not that unusual to put off getting a driver’s license these days.

Unlike most, however, Tom White’s reason for waiting is much more complicated.

Since he was 5, when he was hit by a car while bicycling, this young man from Cuba City, Wisconsin has been fighting his way back from a very serious trauma with few complaints. For the past 13 years, his journey has been filled with countless headaches, seizures, medical appointments and a challenging therapeutic diet intended to make his epilepsy more tolerable.

No, he has not started driving yet, but Tom White, now 18, has still traveled a very long way. His destination – which he believes is in sight – is a greater sense of normalcy than at any time since he can remember.

The car accident, which came close to taking Tom’s life, left him with nearly daily recurring headaches from age 5 through 11½. Thankfully, physicians were able to relieve the pain with medication.

Shortly before turning 11, Tom had his first – and very convulsive – seizure, known as a generalized tonic-clonic seizure. It lasted more than 40 minutes.

“I came home one day, shocked to find an ambulance in the driveway,” says Tom’s mother, Lisa White. “Tom had started convulsing in the kitchen while eating supper with his older brother. It was very traumatic to say the least.”

For the next five years, Tom kept having seizures – about two a month, with most lasting about 20 to 40 seconds each. Most of his seizures looked like “staring spells,” although Tom also experienced occasional convulsive seizures as well.

Tom’s desire to drive began around the time he turned 15. Knowing that his seizures would need to be under control for Tom to begin driving, Lisa and her husband Todd began exploring other options.

“Things were kind of in a rut at the time,” Lisa recalls. “Tom was on three medications, but still having breakthrough seizures. We could never leave him at home alone, because we never knew if he was going to have a seizure. We hoped there might be something out there to improve his quality of life, if not make him seizure-free.”

Brain surgery was explored, but Tom was not considered a candidate at the time. Thankfully, however, UW Health had just hired Elizabeth Felton, MD, PhD, a neurologist with special training in ketogenic therapy, a low-carbohydrate, high-fat, diet that has helped reduce the frequency of seizures in epilepsy patients.

“While we don’t know exactly how ketogenic diets work, they help put the body into ketosis, a state in which the body uses fat for energy rather than carbohydrates,” says Dr. Felton. “Studies show that about half of patients on a ketogenic diet have at least a 50-percent reduction in seizures.”

In the fall of 2016, Tom started a type of ketogenic diet called the modified Atkins diet (MAD). With only 15 grams of carbs to parcel out over the day, Tom loaded up on high-fat foods such as Italian sausage with parmesan cheese and cauliflower mashed potatoes, or sweets like peanut butter with chocolate drizzle.

“With such a small carb allowance, this is not an easy diet, but Tom stuck with it for quite a while and had good results,” says Lisa. “Each week, he submitted a report to UW Health listing his daily food and water intake, weight and seizure activity. He ended up losing 50 pounds and he had more stamina.”

Things were going well during the summer of 2017, however the seizures started again that Labor Day weekend.

“Tom was experiencing more stress with his job at the grocery store and ultimately found it too hard to stick to the diet consistently,” says Lisa.

That fall, just before Tom turned 17, the Whites sat down with Dr. Felton hoping for something new.

“We decided to reconsider surgery,” says Dr. Felton. “After more imaging and testing at American Family Children’s Hospital, we learned that while seizures were being triggered from both sides of the brain, Tom’s bigger seizures were coming from the right side. Smaller, more subtle seizures originated on the left side.”

At this point, Dr. Felton’s team and the Whites agreed on a two-part plan for Tom:

Part one of the plan -- the right temporal lobe surgery -- was performed on July 3, 2018, by UW Health pediatric neurosurgeon Raheel Ahmed, MD.

“The surgery went really well,” says Lisa. “Tom was awake the next day and rather talkative. He was able to come home five days after surgery and showed no visible signs of seizures for the next five months.”

Tom experienced some disappointment after having a 10-second seizure on December 8, 2018. He also had three non-visible seizures in late November that were picked up by home-based EEG monitoring of his brain’s electrical activity.

Driving for Tom remains on hold for now, but there is hope that RNS can play a part in building a seizure-free future for him.

“So far, things are much better for Tom, especially since the surgery was done.” says Lisa. “He has much to look forward to, starting with high-school graduation in May 2019.”