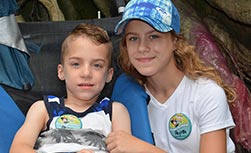 A little boy's seizures – up to 150 per day – left his parents feeling almost hopeless. That's when a UW Health pediatric neurologist suggested a special diet that turned Parker's life around.

When their first son was born to Mark and Laura Pentecost, they were thrilled and delighted. But by the time Parker was 6 months old, Mark and Laura knew something was not right. At first, he could not sit up normally, and he made almost no sounds at all.

"We started seeing strange things," says Laura. "Parker would look off and stare. It was like he was seeing ghosts in the house that we couldn't see. He also would hold on to the furniture closely because he was not walking steady."

The Pentecosts, who live in Poplar Grove, Illinois, were referred to UW Health's American Family Children’s Hospital in Madison. When Parker was 18 months old, he saw David Hsu, MD, PhD, who found Parker to have low muscle tone and global developmental delay, being at about the 9-month level in gross motor, fine motor and language skills. Extensive genetic and metabolic tests were initiated, and a brain scan was performed.

In September 2012, when Parker was 3 years old, he had an extended inpatient video-EEG performed because of staring spells. This study required his doctors to work together to obtain approval. The study immediately showed he was having seizures where he would suddenly twitch (myoclonic seizures). In addition, he had seizures where he would suddenly lose muscle tone and then fall (drop seizures). This combination of seizure types suggested a diagnosis of Doose syndrome. Parker was then started on seizure medications.

Parker seemed at first to respond to his seizure medications, for periods of time.

"Then all hell broke loose," recalls Laura. "The seizures became more frequent and more intense. He would fall to the floor for no reason. He would repeatedly jerk his head forward and hit it on a table. He would stiffen up and fall backward like a tree that was chopped down. He had to start wearing a seizure helmet."

On a single day in December 2012, Laura vividly recalls Parker having 150 – no misprint – seizures.

"It was horrible," she says. "He went into a very serious episode called non-convulsive status epilepticus, which is a long stretch of seizures with only small gaps between each one."

Parker was again admitted to American Family Children's Hospital in Madison, on December 17, 2012, where plans were made to put him on a ketogenic diet.

"Ketogenic therapy involves a high fat, low carbohydrate diet that can help many children with epilepsy," says Dr. Hsu. "It is not easy for families, so we reserve it for children who do not respond to the usual anti-seizure medications. We thought Parker was a good candidate for this diet, because it seems to work especially well for children with Doose syndrome, although we wanted to see how he did on medications first."

Fortunately, ketogenic therapy helped Parker, although remained in the hospital for more than two weeks to recover, including Christmas Day. Dr. Hsu remembers feeling so sorry for this brave little boy that on Christmas, he brought his own daughter to visit Parker in the hospital, where she gave Parker and his older sister, Payton, a little present.

Ketogenic therapy helped Parker's seizure frequency drop from as many as 150 a day to one every few months.

"We do not understand how ketogenic therapy works," says Dr. Hsu, "but we believe that there are several mechanisms, including a direct anti-convulsant effect from a 10-carbon chain fatty acid, but also at least two other mechanisms involving other neurosignalling mechanisms that may take weeks to months to take effect. It can help cut seizures in half in about half of patients who try it, and virtually eliminate all seizures in about 5 to 10 percent of patients. Parker is in this lucky group."

For the first seven months on this diet, Laura and Mark prepared every meal for Parker with extreme precision, turning their kitchen into a virtual science laboratory.

"Every ingredient has to be weighed to the gram," says Laura. "And some of his meals were kind of gross, like one green bean with a half a stick of butter."

Parker began to improve but was still having seizures. The medical team suggested switching Parker to a feeding tube, with a diet of 90 percent fat, 5 percent carbs and 5 percent sugars. For the next three years, the Pentecosts never let their son see "real" food.

"We never ate or cooked in front of Parker, and we never went to a restaurant," says Laura. "It wasn't easy, but it's what you do for your kid."

Parker last had a seizure on June 8, 2013 and has not had another one since. After three years, Dr. Hsu and Parker's nutritionists felt enough time had passed to wean Parker off the ketogenic diet and the feeding tube. Many children retain the benefits even after coming off the diet.

It didn't take long before Parker started eating as if he was making up for lost time.

"This kid eats like a grown man now," says Laura. "It's ridiculous."

Parker has also made great strides developmentally. Although he is still mostly nonverbal, he vocalizes more frequently. He is delightful, playful, and mischievous. His parents describe him as being incredibly well-adjusted emotionally. He enjoys school, where he is a fourth grader, and has a nurse assigned to him constantly.

In terms of genetic workup, Parker was found to have two genetic mutations, one in a sodium channel gene called SCN1A, which can cause a wide spectrum of epileptic conditions, including a more severe syndrome called Dravet syndrome, as well as Doose syndrome. His doctors have chosen to keep the diagnosis of Doose syndrome because of how well he has responded to ketogenic therapy.

The good news is that Parker, now 9, has not had a seizure in more than 5 years. However, his neurologist has noticed increased activity on his EEG and asked his parents if they'd be willing to try a less restrictive form of ketogenic therapy called the low glycemic index therapy (LGIT). His parents prefer to be more proactive in Parker's therapies and they agreed.

What would his parents like people to know about Parker now?

"Parker loves books and cars and really especially loves noises – like a zip, zoom, crack or buzz," says Laura. "He also loves basketball and just watching people. He doesn't scream or yell. He is filled with so much joy and shares love and laughs with everyone he meets."