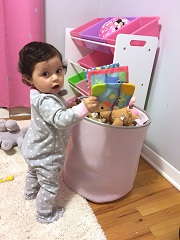 When their baby wouldn't stop having seizures, a Madison family was losing hope. Once doctors discovered the problem, surgery stopped the seizures immediately.

For most families, the days, weeks and months after having a baby are filled with lots of joy – and some stress, typically due to lack of sleep, lots of crying, or running out of diapers at the wrong time.

One Madison family, however, can only wish that the first several months with their baby were so blissful.

For Agnes Glebocka and her husband Julio Leon of Madison, life with their newborn, Milena, felt like an endless nightmare as they watched their baby girl suffer from multiple seizures that started just days after her birth.

"Milena was having these seizures several times a day, every day," says Agnes. "It felt like this had to be somebody else's life. Our doctors were trying, but the medications didn’t help, and things just kept getting worse."

Several months went by, and life for Agnes and Julio was filled with much stress and little hope.

Preparing for the worst

"They were preparing us for the worst outcome," Agnes says. "They told us Milena would not develop well and that she would be seriously affected for the rest of her life."

"We typically do not see a baby having seizures so soon after birth," he says. "Milena's initial MRI scans suggested that she had something called polymicrogyria, a condition in which the brain develops abnormally before birth. The brain surface develops abnormally small folds, which can predispose the brain to make seizures. That's bad enough, but we also know that if there is one area of polymicrogyria, there may be others, and some areas might be so small that we can’t see them on MRI."

When she was one month old, Milena's case was discussed before the entire group of UW Health pediatric neurologists. There was concern that taking Milena to surgery at such a young age would involve too great of a bleeding risk, and that there might be other areas of polymicrogyria that would be left behind. Accordingly, surgery was put on hold.

Aside from her seizures, Milena continued to develop quite normally. Between her seizures, she was a delight to her parents. However, at 7 months of age, she began to use her right hand to reach for objects and bat at them – something also known as a right-hand preference.

"This was a concern," says Dr. Hsu, "because babies should not develop a hand preference before one year of age. Milena's right-hand preference concerned us because the part of the brain that controls the left hand is the same side that contained the polymicrogyria."

It was time to act. Milena's care was transferred to Dr. Hsu and members of the epilepsy surgery team, including epileptologists Andrew Knox, MD, and Adam Wallace, MD, and pediatric neurosurgeon Raheel Ahmed, MD, PhD. This team recommended removing only the part of the brain with polymicrogyria, while preserving the rest of the brain as much as possible.

"Her seizures were worse," Agnes said. "We were in despair."

Dr. Hsu conferred with his colleagues and then recommended removing all of Milena's right temporal lobe.

The second surgery took place one week after the first, and the results were immediate. Milena's seizures stopped immediately.

"We cried tears of joy," says Agnes. "Milena was now a happy, energetic baby. We could not believe such a miracle."

At 11 months of age, Milena is almost walking and developing like a normal child. She no longer has a right-hand preference and uses her left hand as much as her right.

"It is so amazing," says Agnes. "After months of seeing her suffer and two brain surgeries, she has bounced back so well. We are so grateful for the care that gave us our daughter back."

Meanwhile, neuropathological examination of the resected temporal lobe showed that what appeared on MRI to be polymicrogyria was instead focal cortical dysplasia, a condition defined by abnormal formation of the brain layers during brain development.

"There are supposed to be six layers of neurons at the surface of the brain," says Dr. Hsu. "In Milena's area of focal cortical dysplasia, these layers were all mixed up."

In addition, examination of another part of the temporal lobe called the hippocampus showed scarring, probably caused by the frequent seizures.

"This scarring was visible only under a microscope, not on MRI," says Dr. Hsu. "It was a good thing that we took out the hippocampus because had we left it in, it would probably have developed seizures on its own later."

Dr. Ahmed notes that it is critical to evaluate babies with seizures, even in infancy, to determine if they are surgical candidates for resection of the seizure-causing focus.

"Although this involves invasive surgery," he says, "children who are candidates, have excellent seizure control following surgery and recover very well, even if we have to operate on eloquent or critical brain regions to gain seizure control."

"Being free of seizures allows children to develop to their full potential that is otherwise not possible."