18-year-old Kaden Colson of Lancaster, Wisconsin, began having seizures at age 5. They were mostly facial twitches. Fast forward 9 years and the twitches have turned into grand mal seizures that he would suffer 2-3 times a day - and sometimes up to 10 times a day.

"It was a nightmare," said Kerin Colson, Kaden's mother. "We came up with a system where he would knock on the wall to alert us that a seizure was coming." 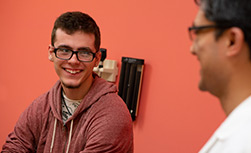 He was on 7 seizure medications.

"It became apparent that Kaden was having the type of seizures that doesn't respond well to medication," said Dr. Raheel Ahmed, Kaden's neurosurgeon.

Dr. Ahmed said the time had come to do invasive monitoring for his seizures and to find the source in the brain that was causing them. Kaden underwent surgery to place a monitoring grid on his brain. That procedure revealed that the seizures were occurring from a part of the brain near normal speech function.

In many cases, after seizure mapping, surgeons can remove the part of the brain that triggers seizures.

With surgery to remove that part of his brain off the table, Dr. Ahmed was tasked with finding something to at least slow the frequency and quiet the intensity of the seizures. Dr. Ahmed knew of a device, recently approved by the U.S. Food and Drug Administration, to control seizures that don't respond well to medications.

The problem was, the device was approved for patients 18 years and older. Kaden was 17.

"We were able to get an FDA exception in Kaden's case," said Dr. Ahmed.

The device is a neurotransmitter that operates very much like a heart pacemaker. The device is connected by leads to the part of the brain where seizures are activated and provides stimulation to control seizures. A remote monitor at home collects information from the neurotransmitter. The data are sent to a patient data-management system that neurologists can monitor to track seizure activity and treatment progress. Non-surgical adjustments can be made to the neurotransmitter for optimal treatment.

Months after the neurotransmitter was surgically placed in Kaden's brain, he has seen significant improvement.

"Seizure frequency and intensity have been reduced by more than 75 percent," said Ahmed.

Mrs. Colson said the surgery made a world of difference.

"It has not been anything like it used to be by any stretch of the imagination," said Colson.

Colson said her son's goal is to get off the remaining seizure medications. One has already been removed from his treatment plan.

"Kaden has a better outlook on life, and while it's not perfect, we'll continue to work toward his goals."