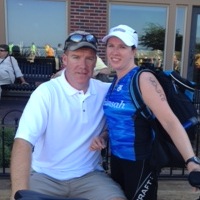 Henry Whyte doesn't cry. Born and raised in the Boston area, the 6 foot, 6 inch, 250 pound Madison police officer acts stoic in his day-to-day experience since dealing with danger is part of the job. But when Henry talks about the phone call that changed his family's life in April of 2010, he responds with a shaky voice. Dawn's recent test results were back. It was breast cancer.

Now over three years later, even thinking about that call still makes Henry emotional. Still, he cracks a half-smile.

"I couldn't even talk, just like now," he says. But he had to keep it together for her.

The cancer was something they couldn't control. Through the removal of the tumor from Dawn's breast, to the subsequent precautionary radiation, to the decision to have a full hysterectomy, the Whytes had control over how to proceed, but they couldn't determine outright results.

Henry kept coming back to the same thought and being from Boston, it rolled off his tongue without the "r": Effcansah. Henry wrote it down, and repeated it to Dawn throughout her treatment. It became their mantra. Then Henry had an idea. One day in the midst of Dawn's treatment, Henry drove up to her office with their boat hitched to the car. On it read their new motto: Effcansah. This time it was Dawn who got emotional, while Henry grinned.

When their friends saw the word, they smiled too, and soon it became a mission. Mark Burkard, MD, had spoken about his research into better therapies for breast cancer during visits, so the Whytes hatched a plan. They launched a website, set up a donation page and started selling shirts, hats, and koozies, all with that magic word printed on them: Effcansah, with all the proceeds going to Burkard's research. One day, the Whytes arrived at a scheduled appointment with a tin of cookies with Effcansah written on the tin and told Burkard about their plan; he was delighted.

"I didn't know what I was getting into," Burkard admits, "but I soon found out that this powerhouse of a woman donated her sweat, tears, a family closet, and her own money to make it happen."

Dawn often receives signs of good will when she wears the shirt in public. "It feels so great to get a 'thumbs-up' or just a nod of approval from a complete stranger," she says.

In fact, a chance meeting with Michele Prieve-Wilkinson led to a partnership. They along with 10 other Effcansah supporters wear the shirts while competing in triathlons, with Michele sporting hers during the Madison Ironman.

Sales of the Effcansah gear have raised several thousand dollars for the cause. So far, funds have been used to develop new therapies targeting breast cancers characterized by additional sets of chromosomes in the cell. Burkard is looking forward to acknowledging Effcansah in an upcoming publication on his work.

During Dawn's treatment, her oldest child Alexandra asked, "if I get older, will I get cancer too?"

"You might get cancer," her father replied, "But, we live close to a great hospital that does great research. By the time you're old enough for that to happen, mom's treatment will be old-fashioned."

If the Whytes have their way, none of their three children will have to deal with this disease, and they know the work they're doing to raise money for research at the UW Carbone Cancer Center is bringing them towards that end. In the meantime, their symbol of resilience, courage, and faith remains: Effcansah