Tanya's Determination Pays Off in Battle with Rare Bone Disease

Tanya's Determination Pays Off in Battle with Rare Bone Disease

It is hard to imagine anyone better qualified to calm anxious families of patients facing surgery than Tanya Nelson, a woman who is incredibly determined not to let an extraordinarily rare bone disease steal her spirit, let alone her quality of life.

A Guest Services Ambassador in the Surgical Waiting Area at UW Health at The American Center on Madison’s far east side, Tanya is one of perhaps 900 people in the world who lives with a disease called Fibrodysplasia Ossificans Progressiva, or FOP. Also known as Stone Man Syndrome, FOP causes patients to produce unwanted bone throughout their body, long after the time most of us stop growing bone. These patients essentially grow a “second skeleton,” in which tendons, muscles and ligaments continuously turn into bone at the slightest provocation. Even a routine injection in the arm can trigger the body to produce more unwanted bone. There is no cure, and many patients are bedridden by their 20s. 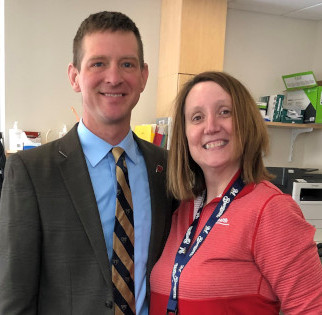 “When doctors first discovered that I was producing extra bone,” she says, “they naturally wanted to remove it, but that is actually the last thing you want to do because the trauma of surgery makes the body angry and it responds by producing even more abnormal bone.”

She was not formally diagnosed with FOP until 2001, five years before the genetic cause of the disease was discovered. Then 29, Tanya found some relief in finally knowing the cause of her pain and mobility limitations, even though she was the unlucky one in 2 million to be saddled with this devastating diagnosis.

“It’s easier to say where my body is not affected rather than where it is,” Tanya says. “My back, my hip, my shoulder…they all hurt and the disease has impacted my ability to walk for years.”

Since 2001, Tanya has been seen at UW Health’s Midwest Regional Bone Dysplasia Clinic, located at the Waisman Center. Janet Legare, MD, a pediatrician and specialist in bone dysplasia who runs this clinic, has treated Tanya for the past five years.

Tanya is the sole FOP patient at UW Health

“Tanya is the only patient with FOP in our clinic,” says Dr. Legare. “While there are guidelines for treating patients with FOP, it is really important to focus on Tanya the person, not the textbook ways to treat her  disease. Listening – really listening – is one of the most important things we as physicians can do, especially with a patient whose situation is as far from routine as you can imagine.”

Unfortunately, things for Tanya took a big turn for the worse in 2017, when her right leg essentially gave up.

“My hip flexor contracted and felt like someone took a razor to my hip,” Tanya says. “While I always had walked with a limp, this really impinged my ability to walk at all. My leg was flexed at an angle, making it hard for me to sleep. I was a hobbling, gruesome looking mess.” Somewhere around this time, Tanya tore her labrum, the ring of cartilage that surrounds the hip socket, also contributing to her increasing disability.

The next 2 ½ years challenged Tanya like never before. She tried everything from physical therapy to Botox injections, which gave limited relief. Her UW Health physical therapist, David Anderson, never gave up trying to help Tanya accommodate her limitations.

By the summer of 2019, Tanya had reached a dark place. Her pain was not improving despite her best efforts and her quality of life was diminishing. Almost out of desperation, she casually approached UW Health Orthopedic Surgeon Brian Walczak, DO, a physician she knew from her workplace, and asked if he would see her in clinic.

“Of course, I was willing to see Tanya,” Dr. Walczak recalls. “Before doing anything, however, I needed to really understand her situation by letting her tell her story and then conferring with Dr. Legare and David Anderson. I also suggested that we do some imaging to get a better look at what was going on with her hip.”

An MRI confirmed that Tanya had a labrum tear. It also showed that extra bone in her iliopsoas muscle near the hip joint was pinching the labrum, all of which contributed to her pain and lack of mobility.

If he was treating a “routine” patient, Dr. Walczak would have suggested doing open surgery. Because of her disease, however, doing open surgery on Tanya would put her at great risk for still more unwanted bone growth due to the traumatic impact of surgery on the body. Another option was to do nothing, a choice Tanya found unacceptable.

By October 2019, Dr. Walczak suggested that Tanya might be able to tolerate a different kind of surgery – one he typically performs on athletes with hip disorders. Tanya was intrigued.

“He thought he might be able to bring some of my range of motion back and allow me to start walking again,” Tanya said. “He gave me hope.”

“The idea,” says Dr. Walczak, “by using a minimally invasive approach, was to repair the labral tear without touching any muscle, minimizing risk for future bone growth. Instead, we would lengthen Tanya’s psoas tendon, which is one of the hip flexor tendons. By navigating around the muscles, I thought we could achieve enough improvement to justify the surgery.”

In January 2020, Tanya was taken to the operating room for what she believed might be her last, best chance at a better life. To minimize inflammation or swelling from surgery – and keep the body from getting “angry” -- Dr. Legare and Dr. Walczak prescribed a course of steroids for before and after the operation.

Dr. Walczak was thrilled by the outcome, which exceeded his own expectations. He was able to move Tanya’s hip, which had been flexed at a 45-degree angle, to lie straight on the operating table. This gave him the access be needed to trim the torn pieces of Tanya’s labrum, smooth the remaining labrum and remove bone fragments.

“If we did well, I was expecting to accomplish 50 percent of what we normally achieve for other patients,” Dr. Walczak says. “We actually achieved 95 percent, which was incredibly encouraging.”

Tanya knew right away that the surgery worked.

“I was off the pain meds by the second day, and when they ran out, I said, ‘Holy cow! I don’t hurt,’” she recalls. “I don’t think I realized just how bad it really was until after I wasn’t in that kind of pain.”

Today, nearly five months after surgery, Tanya’s pain level on a 10-point scale typically sits at “1” or “2” – sometimes even zero. She walks 1.8 miles a day (plus several thousand daily steps at work) and looks forward to resuming water aerobics once the UW Health water therapy pools re-opens following their closure due to COVID-19.

“Tanya’s quality of life is even greater than I expected,” says Dr. Walczak. “It’s so inspiring to see her walking around, happy and confident, especially knowing that what we did was part of a team approach,” says Dr. Walczak, adding that Tanya herself was the key player on the team.

“As Dr. Legare says, you really have to look beyond the disease and listen to the patient,” says Dr. Walczak. “When you only look at the disease, all you see are risks, but Tanya helped convince us to see possibilities we may not have seen right away. She is, no doubt, among the top two or three most inspiring patients I’ve had the privilege to care for.”