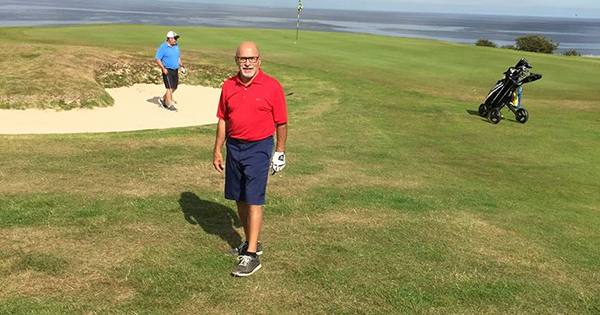 John DeSimone is a self-described people person. The 74-year-old native of Brooklyn, N.Y., can easily befriend a complete stranger in minutes with his colorful personality. Listening to John discuss his recent shoulder replacement surgery is both inspiring and entertaining.

"The meter was running on my body and I was doing a lot of compensating during the last two years," John says. "If I reached for the low shelf in my kitchen cabinet to put dishes away, the pain was excruciating. Same when I tried to shave. My shoulder was just a mess."

After a 41-year career selling television advertising in various spots across the country, John moved to Madison in 2014 to accept his final job in broadcasting, serving as general manager of WMSN (Ch. 47) in Madison. Four years later, as his career was winding down, the pain in his right shoulder - an area of concern for decades - intensified significantly.

He surmises that his shoulder problems originated in high school, when the 5-foot-5, 135-pound running back got whacked on the football field by plenty of guys 75 to 100 pounds heavier. He's remained physically active throughout his life, but as it does for many, age has taken a toll on his body.

"By the time I turned 70, I had almost no rotator cuff in my right shoulder," John says, referring to the set of four tendons that work in conjunction with the deltoid muscle to ensure proper shoulder stability and mobility.

Standard Shoulder Replacement Not An Option

Fortunately for John, however, Dr. Grogan is one of the few experts in the region specializing in shoulder and elbow surgery. He is able to perform an alternate type of shoulder surgery known as reverse total shoulder arthroplasty (replacement).

"With a standard anatomic total shoulder replacement, we insert a new metal ball on the top of the humerus, or upper arm bone, which fits nicely into a new plastic socket that we build into the cavity of the shoulder blade," Dr. Grogan explained. "In a reverse total shoulder replacement, the orientation is just the opposite. We fix a round surface onto the existing socket in the shoulder blade and place a socket into the top of the humerus. This change improves the mechanics of the shoulder and puts the powerful deltoid muscle at a relative advantage."

Reverse total shoulder arthroplasty has been performed in the U.S. since 2003, but many orthopedic surgeons who have been practicing for more than two decades were not trained to perform this procedure.

John did his homework before scheduling surgery and the consensus from those he trusted was clear: Dr. Grogan was "the guy" in south central Wisconsin to perform a reverse total shoulder arthroplasty.

"He had strong credentials, and just as important, I felt very comfortable with him personally," says John. "Nice guy. Smart guy."

John is also a pretty smart guy, saying something that would be music to the ears of any physical therapist.

"You've got to be a major participant in your recovery and really commit to PT," John says. "Guess who loses if you aren't? Me! Guess who wins if you are? Me!"

After meeting with Dr. Grogan, John felt his prospects for pain relief and greater range of motion were excellent, and the operation was scheduled at UW Health at The American Center on Madison's far east side.

"My favorite person in the operating room is the anesthesiologist," John recalls. "My last words to him were, 'I don't want to feel nothing!' "

After spending just one night in the hospital, John was amazed beyond words.

"The shoulder pain that prompted the surgery almost vanished overnight," he says. "On a 10-point scale, it went from a 9 before surgery to a 1 or 2 the next day. There was some pain for a few days, but that was more because of soft tissue being cut in surgery so Dr. Grogan could reach the right places."

As for John's arm, which he could barely raise above a 45-degree angle, he was proudly raising it nearly straight up within three months of the operation.

As he vowed, John has diligently stuck to his PT regimen for the past several months, attending clinic appointments weekly and doing his at-home exercises daily. He can't wait to get back on the golf course, but he knows that day will come soon enough.

While all is going smoothly to date with the shoulder, John probably has another orthopedic joint replacement - a knee - in his near future.

"They told me four years ago that I had one messed up knee," John says.

Once he gets past the knee surgery, John hopes to put his sales skills to work by raising money for a non-profit organization.

For now, John is enjoying life at his Middleton home with his wife, Joanne, and occasional crosstown visits from his grown daughter and her family, including John's irresistible 7-month-old granddaughter, Stella James. In addition to his daughter (Stella's mom), John has two grown sons who reside in Fairfax, Va.