Of the thousands of patients Mark Rhodes has met during his 21-year nursing career, there is one in particular he still thinks about every now and again.

The suffering widower had been admitted to UW Health's Emergency Department with chest pains the day of his wife's funeral service. He was desperate to be discharged. All he wanted was to go home, change clothes and attend the service. He had made a promise to his partner of 58 years to be at her funeral, a promise he might now not be able to keep because the attending physician determined it wouldn't be safe to release him without further observation.

"Any one of us working that day could put ourselves in his shoes," Rhodes says. "Imagine if you had made a promise like that." 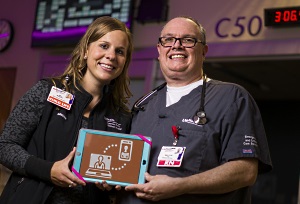 With less than an hour before the service would begin, Rhodes had a big idea. Could seeing and hearing the funeral service as it was happening satisfy the man's promise to his wife? Rhodes ran his idea past the patient's pastor, and then gently laid out his plan for live streaming the service using two iPad tablets and the video chat application FaceTime.

"He had been crying from the moment he arrived. Everyone else was in tears, too, hearing the sound coming from that poor man's room," Rhodes recalls. "But when I explained my idea, he simply stopped. I think he was just that relieved." It took more than a dozen employees, from admissions to cardiology, and 19 phone calls to put the plan in motion.

Rhodes spent 45 frantic minutes trying to track down just one iPad when he ran into Child Life Specialist, Allie Crosby, who uses tablets in pediatric emergencies.

She coordinated between the hospital and the patient's family at the service, making sure the sound quality was sufficient and the iPad had enough battery power to last.

"The sparkle in his eye when I told him he would be able to FaceTime will forever be in my memory," Crosby says. The day was a rollercoaster of emotions, but the hustle and hard work paid off. The patient was able to watch the service in a private room with his pastor, and say his final farewell.

"He was emotionally devastated, being separated from his family," Crosby says, "But I believe he was able to start the healing process because he could still be a part of it."

Rhodes kept an eye on his patient during the service, and says it was like he was an entirely different man: his blood pressure went down, his pulse slowed and his chest pain went away. "You could see the stress lifted from his face," Rhodes says. "He told me ‘It's the most important thing I've ever done in my life.'"

Rhodes and Crosby acknowledge that the miracle that meant so much to one man wouldn't have been possible without the teamwork and spirit of collaboration engrained in UW Health's Emergency Department.

"[Teamwork] means going above and beyond, taking the extra step and sometimes going outside your 'typical' role to provide the best care," Crosby says. "When that happens, the warm, fuzzy feeling you get is irreplaceable." Rhodes agrees. He says the people he works with are his second family and the best part of his job.

"It really does take everyone to make great things happen. I rely on every single team member—from the person who greets patients, to the person who discharges them—to help me give the best possible patient care."

Reflections in Nursing 2016: It Takes a Team