But that’s exactly what happened to Delia Brayden of Montello, Wisconsin, whose heart stopped without warning while she was doing dishes in her kitchen. Brayden doesn’t remember anything about the next two days. But she knows she’s extremely lucky to be alive.

“My friend told me I just fell into the dishwasher,” says Brayden. “She performed CPR on me and called 911. Otherwise, I’d be dead.”

Brayden had known something was wrong for weeks as she experienced inexplicable shortness of breath and fatigue. She had no idea the source of her fatigue was a Arrhythmogenic Right Ventricular Cardiomyopathy (ARVC). Unbeknownst to her, a defective protein was causing her cells to communicate abnormally. The miscommunication disrupted her heart’s natural electrical system and led to a potentially fatal heart rhythm.

“ARVC is very rare, although it’s one of the top diagnoses among inherited arrhythmias,” says Lee Eckhardt, MD, the cardiologist who treated Brayden at UW Hospital and Clinics, eventually installing a defibrillator to help her heart if it malfunctions again. “Still, it’s very unusual to see this condition in someone as young as Delia with no prior symptoms.” 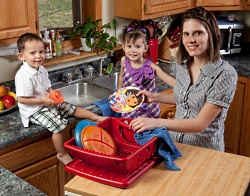 Inherited arrhythmias such as ARVC are rare but can lurk undetected in the genes of families for years. They often become apparent when an individual dies suddenly. Many people who have these conditions also have relatives who may have died suddenly. Brayden had a cousin whose heart stopped in her sleep in her 40s.

At UW Hospital and Clinics, doctors like Eckhardt and her colleagues in the Inherited Arrhythmias Clinic take a comprehensive approach to conditions like ARVC. They map out the gene mutations and mechanisms that cause them to occur, as well as screening families who have them.

Eckhardt and her colleagues spent several days with Brayden’s case and conducted a variety of tests, including endocardial voltage mapping and cardiac MRI, to be sure they chose the therapy best suited for her condition.

“Delia’s case highlights the need for a thoughtful approach to diagnosing people who have had a cardiac arrest,” explains Eckhardt. “The treatment implications can be vastly different from one type of arrhythmia to another."

Although she’s feeling better now, Brayden’s neardeath experience has dramatically affected her thinking. “People need to listen to their bodies and tell their doctors when they think something is wrong,” she says. “I never figured someone as young as I am would be dealing with this.”