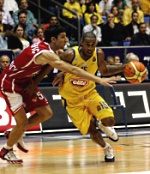 A new study from the University of Wisconsin School of Medicine and Public Health shows that high-school basketball players who wore stabilizing lace-up ankle braces had 68 percent fewer injuries than athletes who did not.

The study, presented at the annual meeting of the American Orthopaedic Society for Sports Medicine in San Diego, examined athletes who used the lace-up ankle brace-one of the most popular type of braces currently used by collegiate and high school players in the U.S. The study is the first of its kind to examine the efficacy of lace-up ankle braces to prevent both first-time and recurrent ankle injuries in adolescent basketball players.

"The research suggests that wearing lace-up ankle braces is a cost-effective injury-prevention strategy for adolescent basketball players," said Tim McGuine, UW Health Sports Medicine researcher, athletic trainer and lead author. "Basketball has one of the highest rates for ankle injuries, and this study illustrates how a simple brace can help keep an athlete on the court."

The researchers gathered data on a total of 1,460 male and female basketball players from 46 high schools across Wisconsin during the 2009-10 basketball season. The players, all of whom voluntarily enrolled in the study, were randomly assigned to be part of a group that used braces (740 students) or a control group that did not (720 students).

Players in the control group sustained 78 acute ankle injuries, while players who wore the brace got only 27 similar injuries during the same amount of exposures. An exposure is defined as any coach-directed competition, practice or conditioning session. Researchers found no significant difference in the severity of injuries between the groups.

Study co-author Dr. Alison Brooks, assistant professor in the UW Department of Orthopedics and Rehabilitation, division of sports medicine, says the research provides some hard evidence to support a product that many families have been investing in for years.

"Parents were paying a substantial amount of money for a device that had never been proven effective," Brooks said. "Our results show that the benefits of ankle braces far outweigh the expense."

Acute ankle injuries are typically the result of a traumatic event, most often caused by the sudden stops and starts common to a sport like basketball. Ankle injuries are the most common type of injury in high school athletes in the United States, with 78,000 occurring in female and male high school basketball players annually.

Each injury costs approximately $11,900 per athlete, in direct and indirect costs, to treat. Furthermore, 30 percent of the athletes who sustain ankle injuries will experience long-term negative consequences that severely affect their ability to maintain a healthy, active lifestyle as adults.

Researchers are completing a similar study on the effect of ankle braces on high-school football athletes, the results of which will be available in the fall.

The study was funded by the UW Department of orthopedics and Rehabilitation and the UW Sports Medicine Classic Research Fund. The study will appear in the September issue of The American Journal of Sports Medicine.