Wisconsin Children Exposed to Too Much Secondhand Smoke

Wisconsin Children Exposed to Too Much Secondhand Smoke 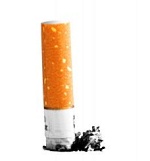 MADISON - Wisconsin children are exposed to secondhand smoke at a rate 40 percent higher than the national average, according to research published in the July issue of Pediatrics.

The study, conducted by researchers from the National Cancer Institute, found that 10.5 percent of Wisconsin children age 17 and younger are regularly exposed to secondhand smoke. That is the fifth-highest level of secondhand-smoke exposure in the nation.

A companion finding shows that 39 percent of Wisconsin youngsters who live with a smoker are exposed to secondhand smoke, second highest in the nation.

Based on the data in the report, University of Wisconsin Carbone Cancer Center researchers estimated that nearly 139,000 children in Wisconsin are regularly exposed to secondhand smoke in their homes.

The epidemiologists said they were surprised by the research findings because Wisconsin's high rate of child exposure is not associated with a similarly high smoking prevalence rate among adults. In 2007, Wisconsin had the 25th-lowest adult smoking rate in the nation (19.6 percent).

Researchers also found that Wisconsin children were exposed to smoke in 39 percent of homes with a smoker, second only to West Virginia (41 percent). Cold weather and reluctance to smoke outside does not seem to explain the high rate. Other cold-weather states such as Minnesota, North and South Dakota have exposure rates that are about half the rate in Wisconsin.

"While the level of secondhand-smoke exposure has declined substantially in the last decade, there is a continuing need to educate parents and caregivers of the immediate and long-term health effects of exposure to secondhand smoke," said Dr. Nathan Jones of the UW Carbone Cancer Center's Tobacco Surveillance and Evaluation group. "Parents and caregivers who smoke should be encouraged and assisted in quitting, rather than recommended to 'take it outside.' We need to get a better understanding of why exposure is so high in Wisconsin and how to address this public health problem with often long-term and serious consequences."

The UW Carbone Cancer Center is the only comprehensive cancer center, as designated by the National Cancer Institute, in the state of Wisconsin.