When a Child is Diagnosed with a Brain Tumor: The Yanceys' Story

When a Child is Diagnosed with a Brain Tumor: The Yanceys' Story 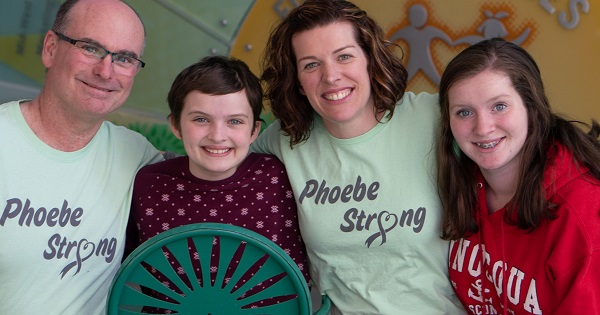 Jennifer Yancey remembers the whirlwind that hit her family when her youngest child, Phoebe, was diagnosed with a malignant brain tumor last summer.

A few days before, the family, which includes husband Mark and sister Peyton, 13, had been enjoying their traditional family vacation of fishing in Northern Wisconsin.

But when they got home to Oregon, Phoebe’s headache turned severe, and she soon had symptoms that resembled a stroke. An ambulance ride to American Family Children’s Hospital, a CAT scan, and emergency surgery to relieve the pressure on her brain followed within hours. A few days later, she had more extensive surgery by Dr. Bermans “Benny” Iskandar to remove a large tumor from the thalamus region of her brain. Then came the pathologist’s report: Phoebe’s tumor was a stage 3 anaplastic astrocytoma. In other words, cancer.

“The diagnosis was a complete shock,’’ Jennifer Yancey said. “And then we had this tornado of information to deal with.”

Today, Phoebe knows more about brain tumors than any 11-year-old should know. Following surgery, she had 33 treatments of radiation, with Dr. Kristin Bradley, and then 72 rounds of oral chemotherapy supervised by Dr. Diane Puccetti.

She finished up her maintenance chemo treatment in early March, and her scans look good.

Phoebe’s dark hair is growing back into a cute pixie cut that emphasizes her huge gray eyes and dimple, and she’s looking forward to starting to work out with her soccer team again.

“Soccer was my everything,’’ she says. “When I had to give it up, it was devastating.”

But for everything she lost during the nine months of treatment, Phoebe has also gained a wisdom that is years beyond her age.

“I used to want to be one of the girls on the Disney Channel,’’ she says. “Now, I’m just happy to be me. I like my own family and the house I live in. And my sister is everything to me.”

Sister Peyton had her own struggles with watching her only sibling go through cancer treatment.

“You have to rely on your family, because none of your friends understand what you’re going through,’’ Peyton says. “It’s understandable, but it made it lonely. I got tired of people telling me that everything was going to be all right.”

Jennifer says that seeing the girls grow closer was one bonus of the family’s bout with cancer. Mark says his daughter’s positive attitude made it easier on the family.

“She’s not afraid of anything,’’ he says. “She has so much positive spirit that it’s hard to be depressed when she’s leading the way.”

The family kept up as many normal activities as possible, even returning to the North Woods during Phoebe’s treatment. Jennifer says the best advice came from another mother whose child was going through a serious health condition.

“She told me to have faith in my child and take the lead from her,’’ Jennifer says. “Once we adopted that, everything was easier.”