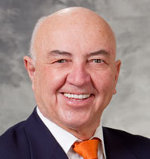 Madison, Wisconsin - Dr. Hans Sollinger, the Folkert O. Belzer Professor of Surgery in the division of transplantation at the University of Wisconsin School of Medicine and Public Health, received the Roche Award for Outstanding Achievement in Transplantation Science (clinical) this week at the international congress of The Transplantation Society in Berlin.

The Transplantation Society's recognition awards are given every two years to honor physicians and researchers around the world who have made outstanding contributions to the field of transplantation science.

"It's an honor to be recognized for what has been for me a lifelong commitment to advancing the field of transplant science-one that has been made all the more enjoyable and successful because of the ongoing support of my colleagues at the University of Wisconsin and around the world," said Sollinger. "I am encouraged by what the future holds for our field and I'm more optimistic than ever that our research will continue to push scientific frontiers."

Since joining UW Health in 1975, Sollinger has helped revolutionize the transplant field and made the UW transplant division a nationally recognized program with some of the highest success rates in the country. His most notable accomplishments include the development in 1982 of the "Wisconsin technique" for pancreas transplants, a method that has more than doubled the survival rate of kidney-pancreas recipients throughout the world; and in 1995 he developed a immunosuppressant drug called CellCept, which has since become one of the world's most frequently used drugs of its kind, benefiting more than 600,000 patients world-wide. Sollinger's current research interests include clinical and pre-clinical testing of new immunosuppressive agents, gene therapy for cell transplantation, and responses to histocompatibility antigens.