UW Hospital and Clinics Mother of the Year: Becky Hagen

UW Hospital and Clinics Mother of the Year: Becky Hagen 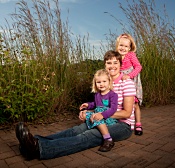 Madison, Wisconsin - Becky Hagen grew up in an Iowa town with fewer people – 266 – than her current employer has hospital beds (566).

Hagen, a nurse in the general surgery clinic at UW Hospital, has been named UW Hospital and Clinics’ Mother of the Year through Working Mother magazine for her dedication and excellent work record while also taking care of her family which includes two girls: Kjersten, age three and a half and Jocelyn, age two.

Hagen was recognized by Working Mother magazine last night at a ceremony in New York City.

Hagen was nominated for the award by a group of individuals from UWHC’s surgery clinic. Comments in her nomination paperwork included, “She has taken a very active role in moving primary nursing care forward in the surgery clinic.  Not only does Becky mentor other nurses through her active roles as a preceptor, magnet representative and RN council chair, she has developed primary nursing and expanded her role as an RN in plastic surgery.”

Hagen said learning that she was named the Mother of the Year was a total surprise.

“One day, I was presented with a sticky note that said I must call a phone number,” she said.  “I called and it was (human resources program director) Kristin Kunz.  No one answered, but Kristin called back and let me know I was named Mother of the Year.  I was floored.  It was definitely unexpected and I didn’t know I had even been nominated.  It’s great to represent UW Hospital and Clinics and to be recognized by my colleagues.”

After high school in Alta Vista, Iowa, Hagen attended Northern Iowa University and then earned her nursing degree at Regis University in Denver.  In 2006, Hagen and her husband Collin picked Madison as the best place for her to obtain her first nursing job and for him to find a job as a pharmaceutical researcher.

When Hagen began work at UW in 2006, she and her husband had no children, and Hagen often worked weekends and evenings to make additional income.  When she gave birth to Kjersten and Jocelyn, Hagen said the hospital and her supervisor made it easy to alter her schedule to only work daytime hours.

“Once the girls came along, we knew we needed something more accommodating for our family,” she said.  “The position I’m in now allows me to spend my evenings and weekends with my family.  That’s paramount for me.”

Hagen is impressed with the unique family-friendly programs and benefits the hospital provides its staff.

Hagen said she is using the hospital’s tuition reimbursement program to work toward a master’s degree at Edgewood College, has taken advantage of the hospital’s back-up care program, which locates last-minute center based child care when her usual care arrangements for her daughters broke down , and participated in on-site wellness classes offered by UW Hospital and Clinics.

Hagen also credits her husband, Collin, who has been extremely helpful in raising their girls and making sure things at home are kept in order.

“Our family is very much a 50/50 relationship, but he does much more than that,” she said.  “He’s incredible.  He cooks meals, does shopping, and takes the girls to their doctor’s appointments.   We put family first, but we also make time for exercise and spending time with our own families.  If we didn’t have the same values, I would not have been nominated for this award.”

“When I heard about the award details, and I learned I’d be participating in a photo shoot with my children and that my husband and I were able to travel to New York City for the awards ceremony, it was at that point when I was brought to tears,” Hagen said.  “It wasn’t just me being recognized, but my whole family and that meant a lot.”