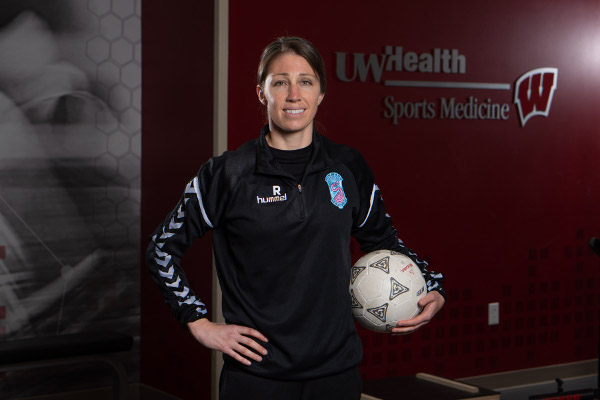 When Forward Madison FC kicked off its inaugural season in April, the professional soccer team's coaches, front-office staff and players were clear that they expect to compete at the top of USL League One.

UW Health Sports Performance coach Alison Regal has a similar goal in her role with Forward Madison: Making sure the team's players are in top physical condition for what figures to be a grueling season.

Regal has spent a lot of time on soccer fields, first as a player at Appleton East High School and UW-Stevens Point, then as a coach at Cornell College in Iowa and more recently with youth teams.

The chance to work with professional players through UW Health - the official healthcare provider of Forward Madison - has been a winning combination for Regal.

"This has definitely been a great opportunity and I've enjoyed it immensely," said Regal, who is a Certified Strength and Conditioning Specialist through the National Strength and Conditioning Association. "I think the guys are very responsive and have been enjoying what I've been doing, which is half that battle. You want to get respect from them and you want to make sure that they understand what you're doing and why you're doing it."

Conditioning is vital in soccer: With 45-minute halves, a constantly moving ball on a large field and no timeouts, professional players commonly run between 7 and 9 miles per game. Forward Madison will play a minimum of 33 matches before the season ends in October, meaning there will be a lot of wear and tear on the players.

Regal attends one or two of the team's practices each week at Breese Stevens Field, leading players in a dynamic warm-up and mobility drills, and twice a week the team visits her at UW Health at The American Center. She uses an app that asks players questions to help determine their levels of fatigue, which allows her to create appropriate workouts and weight-lifting sessions for the players.

And these aren't your average lifting sessions.

"It's not your typical just go in and do a set of squats and then call it good," she said. "We select exercises that challenge the neuromuscular system in many different ways using resistance bands, medicine balls and our Keiser equipment. For example, we have the guys do a split squat, but combine it with a resistance band that is creating a rotational pull at their trunk. So, it is challenging the body in different ways to elicit a different effect that they probably have never gotten just going and lifting by themselves - or even some of the stuff they've done with other trainers."

Some of the trips to The American Center are scheduled the day after a game and feature re-generation sessions for the players who logged the most minutes - usually the starters. At the same time, those players who didn't play - no more than 14 of the team's 24 players can appear in any one match - can get their heart rates up by playing small-sided soccer games on the indoor or outdoor turf fields at UW Health's state-of-the-art Sports Performance facility. 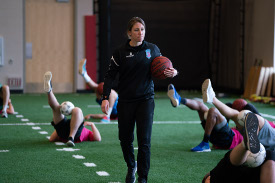 "The players who've been around for a while, they get it," Regal said of the sessions. "They get that there's more that goes into just showing up and practicing or doing a lift. They get that they need to be doing x, y and z throughout the day - they need to be focusing on their nutrition, getting a good night's sleep, recovering, whether that's in the form of going to see the trainer or getting a massage, foam rolling, whatever that may be."

But sometimes players need a little convincing of the benefits of Regal's sessions. In some cases, it's because they are young, healthy, strong athletes who might not be looking at the long view when it comes to their bodies. Still others grew up in cultures where sports performance and conditioning practices aren't as common as they have become in the U.S. - after all, Forward Madison's roster features players from 11 countries.

A big key is an open line of communication between Regal and Forward Madison coach Daryl Shore and assistant coach Neil Hlavaty.

"I have my set routine with how I do things and they have a set routine with how they do things, as well," Regal said. "I've never been one to say 'You need to do exactly what I tell you' - I like to work together and make sure we're on the same page and reach a common goal of whatever is best for the players. I've watched Neil do some of his warm-up stuff and I've taken some of it and put it into my warm-up and vice versa."

One thing Regal won't do is introduce soccer exercises into her sessions unless she's discussed it with Shore and Hlavaty ahead of time and they're on board with the idea.

That's a major difference from her work with younger soccer players - Regal has a U.S. Soccer Federation "D" license and was recently elected to the Madison Area Youth Soccer Association Board of Directors.

"If I'm going to do a soccer drill, I want it to line up with what Daryl and Neil have in mind," she said, explaining: "When you're at that high of a level of playing, the movement quality you see is very different than what you see with youth athletes. These guys, they change direction very well, they're explosive, they're powerful, they're fast. That's why they're playing at the level that they are. So when I'm creating workouts for them, I don't focus on soccer-specific skill training, but more so on challenging them at different levels in terms of their strength ability and their range of motion."

If you visit Breese Stevens this summer to watch a game, you might see Regal sitting on the Forward Madison bench. "I'll take the non-starters and just do a little quick dynamic movement with them off to the side once each half," said Regal, who will help those substitutes stay loose and be ready to go in when and if Shore calls on them.

Regal's work with Forward Madison players will continue through the offseason months as the team prepares for its 2020 season, though those details haven't yet been finalized.

"This has been a great experience," Regal said of working with Forward Madison. "I don't think there are any restrictions. This is a new team, a new partnership. Let's figure it out this first year and then make it better every single year. The cool thing is that there are so many things that we can do, and it will be exciting to just see what happens moving forward."