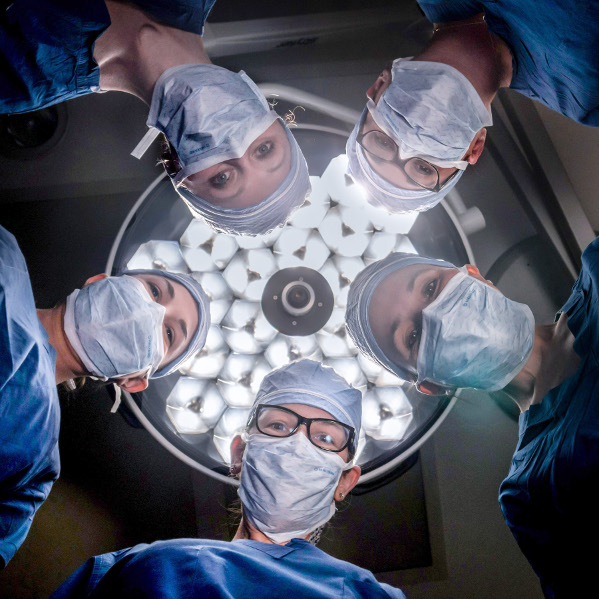 Madison, Wisconsin - Take a magazine cover drawn by a French artist, add in the feminist spirit of Wisconsin surgeons, and you get a Twitter meme that travels the world.

It all started in Orlando, Fla., the first week of April, when Dr. Susan Pitt, assistant professor of surgery, was at the American Association of Endocrine Surgeons conference in Orlando. The April 3 New Yorker health issue had just arrived, and its cover showed a quartet of a female surgeon and her team peering down at a patient. Not all readers may have noticed that the four were female, but Pitt certainly did.

She gathered some friends, and they duplicated the shot with a smart phone, adding the Twitter hashtag launched by a female medical student in 2015: #ILookLikeASurgeon

Pitt then added her own #NYerORCoverChallenge, encouraging women surgeons to duplicate the shot.

And, oh, did they. Photos of women surgeons have been trending on Twitter, from Saudi Arabia and Mexico, Turkey and Ireland, Brazil and Australia.

The meme has gone viral in the nonmedical sense, and when she's not in the operating room, Pitt has been fielding calls from the likes of Buzzfeed and The Huffington Post.

"One of the amazing parts about the #NYerORCoverChallenge is how much all of the participants share the same beliefs and experiences no matter where they are in the world," Pitt says. "I don't know the vast majority of participants, but I know how they feel.

"Women surgeons are saying to other women surgeons, 'I see you,' and to the world, 'See us.' It's like an unspoken bond of sisterhood."

Illustrator Malika Favre's image resonated with a discussion going on in the world of surgery, with Wisconsin women surgeons helping lead it. The issue is: Why, when women make up more than half the number of medical students - and 38 percent of practicing physicians - do they only account for about 19 percent of surgeons? Pay equity is a related issue.

Pitt says her eyes were opened by a rabble-rousing speech that Wisconsin's Dr. Caprice Greenberg delivered this year in her role as outgoing president of the Association of Academic Surgery.

Her speech, "Sticky Floors and Glass Ceilings," has been viewed thousands of times on YouTube. And leadership of that group is still in Wisconsin hands – Dr. Rebecca Sippel, professor of surgery, took over leadership from Greenberg. Meanwhile, another UW Carbone Cancer Center surgeon, Dr. Sharon Weber, has been president of the Society of University Surgeons.

Wisconsin is way ahead of the national situation; nearly half of the faculty in general surgery are women. Currently 20 of 38 are women, with more joining the faculty later this year.

Pitt says it's been a great place to advocate for greater female participation in surgery.

"A major privilege of mine is to work in a department of surgery with so many inspiring women who challenge gender roles, expectations, and biases," says Pitt, who recently won the UW Carbone Cancer Center's annual award for promising young investigators.

"We have a unique atmosphere of collaboration without competition," she continues. "Our camaraderie extends throughout the department beyond gender lines. Women need to be recognized for the excellent care that they provide and should be paid the same as a man for doing the same job."

When Pitt got back to Madison, UW Health photographer John Maniaci got onto the floor of one of the operating rooms at University Hospital to take a shot of surgery faculty Drs. Amy Liepert, Angela Ingraham, Ann O'Rourke, Emily Winslow and Pitt. And yet another image of women surgeons was tweeted out to the world. Along the way, women in other health professions - anesthesiologists, ophthalmologists, gynecologists, nurses and more - joined in the fun.

"I was truly moved by the beauty of Malika Favre's art and inspired by the powerful image of an all-female surgical team," Pitt says. "Malika's operating theatre of women is not at all theatrical, but a reality. Women in the OR, in the hospital, and anywhere in the world can have any role they want. I was hoping to open people's minds, inspire little girls, and let the world see how strong and beautiful women are."