Imagine waking up in the Neurosciences ICU, and finding that the simple tasks of life - such as walking and talking - had become impossible.

A newly trained group of University Hospital volunteers doesn't have to imagine: they know. And they can point to the exact hospital room where they first opened their eyes after a brain injury and began their own long journey to reclaiming their lives.

UW Health patients who are recovering from strokes and other brain injuries will have help along their journey from the volunteers in the new Brain Injury Peer Visitor program.

Bringing the program to University Hospital was the work of neurosciences case manager Jodi Atwell and service line director Cheryl Hoeth, who welcomed the new volunteers to a training session in September. 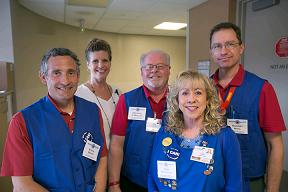 The hospital already had an informal peer-visitor program led by former Neuro ICU patients Eric Sarno and Rodney Noll. But when Noll was recovering from his brain surgery, he also found a lot of good information online from the Brain Injury Peer Visitor Association.

He was also helped by a phone friendship with a peer visitor from Georgia – a tattooed biker nicknamed "Ram" who had recovered from his own brain injury and was always there to listen and offer information about recovery.

Noll thought it would be great to bring the training to Madison, and with the support of Hoeth and Atwell and a grant from the Christopher & Dana Reeve Foundation, the first group of five new volunteers began their training.

They heard how educator and business executive Ann Boriskie, of Atlanta, founded the group after her own struggle to recover from a brain injury she received in an auto accident 18 years ago.

"I didn't know what was wrong with me," she told the group. "I was getting lost, running red lights, I couldn't write cursive . . .and I kept thinking, ‘Why did this happen to me?’ "

There are knowing nods all around the room. Since Borskie began the program, volunteers have made 31,000 patient visits. About 85 percent of the volunteers are people who have suffered a brain injury and 15 percent are caregivers who can offer support to other spouses and loved ones caring for someone with a brain injury.

The group is mostly active in the southeastern United States. Madison is the first location in the North. 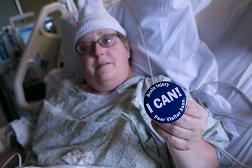 During the two-day training, volunteers learned how to make visits and fill out paperwork and practiced visiting patients under supervision. When they make their official visits, they'll wear the association's blue vest and hand out information from the American Stroke Association, as well as resource lists, websites, helpful books and news articles and information on local support groups such as Fresh Start.

In addition to Noll and Sarno, the new volunteers are Michael Christopher, Steve Mintz, Michael O'Malley and Paula O'Malley.

Boriskie says that if more former patients are interested in becoming volunteers, she will return to UW Hospital in about a year to conduct another training session. She says that volunteers get so much from those they help.

"We are paid in hugs,'' she says. "You give love and get love. And I learn something from every person I visit."