From Vietnam to Madison and Back: Dr. Cat Burkat

From Vietnam to Madison and Back: Dr. Cat Burkat 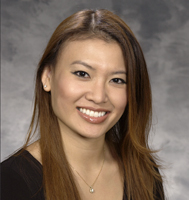 Madison, Wisconsin - Driven from her home as a child during the fall of Saigon, UW Health's Cat Burkat, MD, has used her skills as an oculoplastic surgeon to re-establish the connection to the country of her birth, a connection that was severed by the Vietnam War.

An assistant professor in the UW School of Medicine and Public Health's Department of Ophthalmology and Visual Sciences, Dr. Burkat's journey to Madison began in 1975 when her father took her family from Saigon on the day Vietnam's crumbling capital fell to a refugee camp in Pennsylvania.

"I don't have any early memories of Vietnam, because I was very young," Dr. Burkat says. "But my older sister remembers running away when the bombs were going off."

A New Country and the Birth of a Profession

At the refugee camp Dr. Burkat's father, a captain in the Vietnamese Navy, used his grasp of the English language to serve as a translator for patients tended to by a local volunteer doctor. Over the course of a few weeks the captain and the doctor became friends, and that relationship resulted in the doctor taking them into his home.

"That's how we started our lives in the States," Dr. Burkat says. 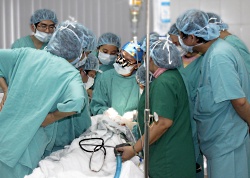 It's also how Cat became interested in medicine at a young age. The doctor's office was in the house where Cat and her family lived, and soon his appointments featured a pre-teen protégée, of sorts.

"The idea of medicine formed so early in my mind," Dr. Burkat says. "I would pop up to his clinic, and sit and watch him. I knew I liked patient care and the relationships. I liked the idea of being able to help in that way."

Medical school and residency work in Rochester, New York followed her undergraduate studies at Harvard, and after that Dr. Burkat decided to accept a fellowship in ophthalmic facial plastic and reconstructive surgery at UW Hospital and Clinics.

"I wanted to get extra training in oculoplastic reconstructive surgery, and this was one of two fellowships in the country that had both," Dr. Burkat explains. "People who complete these fellowships tend to go on to do more complex surgeries - orbital tumors, eyelid tumors and reconstruction, facial surgery."

Her skills refined and her practice established, Dr. Burkat cast her eye back to the homeland she fled 30 years previous.

"I always wanted to go back to Vietnam. I wanted to make a connection, to give back," she says. "That meant a lot to me."

She also wanted to help, and her training had prepared her to do so in a way that benefited those who needed it most.

Though the Vietnamese health care system adequately serves the wealthier, urban enclaves in the north and south, the country's poor, rural center region rarely has access to the kind of specialized care Dr. Burkat provides.

"They have a lot of excellent doctors but they aren't trained in the same way we are," Dr. Burkat says. "I wanted to treat people who have a harder time getting the care they need."

First she had to find them, which Dr. Burkat says involved "a lot of internet searches. I looked for eye institutes and eye hospitals and from there e-mailed everyone I could and asked if I could teach and work with them, do whatever I could."

She's been to Vietnam four times and organized two humanitarian medical trips since, the first in 2009 and most recently in January 2012, during which she spent a week in the operating room and three days lecturing Vietnamese doctors on the finer points of oculoplastic surgery. In choosing where to lend her services, Dr. Burkat looked for areas with dedicated ophthalmologists already in place, so she could maximize her impact by teaching Vietnamese doctors techniques they could use with their own patients.

The pediatric patients she operated on tended to suffer from congenital defects such as cleft eyelids and severely droopy eyelids that, if left unaddressed, often lead to amblyopia (lazy eye). In young children the muscles responsible for lifting the eyelids are often underdeveloped, so Dr. Burkat employed a procedure that "slings" the eyelid to the forehead, so the forehead's stronger muscles can help lift the eyelid.

"There's a crucial period when you need to fix it," Dr. Burkat says, "or they may never develop good vision."

She also removed cancerous tumors from the eye sockets of adult patients and, astonishingly, treated injuries suffered during the war that forced her family from their home so many years ago.

"Vietnam still has a lot of residual trauma from the war - people with major facial malformations and defects that have not been treated since then," Dr. Burkat says. "I took bomb fragments out of (a man's eye socket) that had been there for all those years."

Her surgical work is aided by her fluency in Vietnamese, which Dr. Burkat says mitigates potential communication difficulties during her four-hour lectures to her Vietnamese colleagues and relaxes her patients.

"They really connect more easily because I speak the language," she says. "They light up and seem really happy to talk to me."

"They loved her," says Shelby Hart, a program assistant in the Department of Ophthalmology and Visual Sciences who accompanied Dr. Burkat on two trips to Vietnam. "She's incredibly talented and genuinely cares about people. I loved watching Cat work with them."

Though she returned just weeks ago, Dr. Burkat is already looking forward to her next Vietnam sojourn. She hopes to go back annually, and says the trips reinforce the reason she originally chose her profession.

"It makes you realize why you're doing medicine," she says. "I love going there and seeing new people and helping out. They're just so welcoming and grateful and generous. I'm trying to go to the same places several times, to make sure they're comfortable with what I've been teaching them. From there, we can always go to other places. We can always do more."