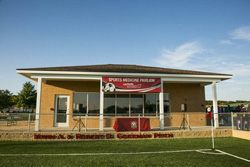 But none of the athletic trainers who will spend time working in the new facility were part of the festivities.

"Our athletic trainers who work out here do a great service in the community, both in terms of soccer tournaments and then traditionally the outreach program that we have," said Dr. David Bernhardt, a UW Health pediatric sports medicine specialist. "The reason that none of them are here tonight is because all of them are working at different high schools, either covering practices or covering events."

The Sports Medicine Pavilion will allow UW Health athletic trainers, who have long provided medical services at tournaments at Reddan, to offer even better care to the children and adults who play at the 60-acre park operated by the Madison Area Youth Soccer Association.

"This building ... (is) proof that at Reddan Soccer Park, we want to be treating our athletes seriously," MAYSA executive director Chris Lay said. "And, it's gorgeous."

The 1,000-square-foot facility includes treatment tables and a temperature-controlled environment that will improve the patient experience.

In the past, athletic trainers at Reddan have treated injuries on picnic tables, the back of golf carts or on the ground - in the rain, cold and heat - usually with other players and parents nearby.

"You'll get some privacy, so you don't have the gawkers," said Dr. Bernhardt, who has watched many matches at Reddan as his three sons played club and high school soccer. "I've been out here before where I've had a girl with a huge gash on her forehead and everybody is stopping to look. It really doesn't give her a sense of comfort or a sense of privacy ... You'll get the privacy to evaluate a kid like that and get her at least initially stabilized in a center like this.

"Another thing to think about is two months from now when you’re having practices out here and it’s freezing cold, trying to stabilize somebody when you're shivering and they're shivering is not an easy task, and having a warm building to actually stabilize them will be great."

The facility also has an ice machine, meaning athletic trainers won't have to keep restocking coolers, along with stationary bicycles, medicine balls and other equipment used for helping players rehabilitate injuries.

"This is really going to be like another outreach high school," Dr. Bernhardt said. "We're going to have athletic trainers here four or five nights a week when your kids are practicing, which I think is going to provide a great service for them in terms of injury evaluation, emergency injury coverage and then, above and beyond, really, the rehab that they can get on site. A facility like this really will allow us to do that."

Dr. Bernhardt added that UW Health also plans to provide education on topics such as sports nutrition, injury prevention and strength and conditioning through presentations to the many local clubs and teams that play at Reddan Soccer Park.

"We really look forward to the continued partnership with MAYSA," he said.

The large windows at the front of the Sports Medicine Pavilion overlook the new Irwin A. & Robert D. Goodman Pitch, a 99,000-square-foot FieldTurf soccer field that recently opened for play. The scoreboard at the other end of the field is jointly sponsored by UW Health and Unity Health Insurance.

"UW Health was the first major donor to get behind this project," Lay said. "They have been wonderful supporters here."

The event celebrated the opening of both facilities at the 16-year-old park, with officials from UW Health, the Irwin A. and Robert D. Goodman Foundation and MAYSA joining together for a ceremonial "first kick" on the new field.

Reddan is the largest and busiest soccer park in the area, playing host to more than 700 practices, 1,200 league games and eight major tournaments each year, and is the home of the Verona High School and Madison Edgewood High School boys and girls teams. The facility also has hosted the USA Cycling Cyclo-Cross National Championships and the USA Ultimate Frisbee Division I College Championships in recent years.