On the fully supported two-day ride, participants rode from Waukesha to Madison, choosing a 60-, 75- or 100-mile route each day.

Barbara and Jerry - a physician with University Health Services - were inspired to start the team and support the MS Society after their son, Eric, was diagnosed with MS.

Eric is one of 400,000 individuals in the United States living with multiple sclerosis, and the team name UW Health "Red's Riders" pays tribute to their son's red hair and fighting spirit. Eric can usually be seen riding along with the team, showing that though there are challenges, there is life after MS diagnosis. 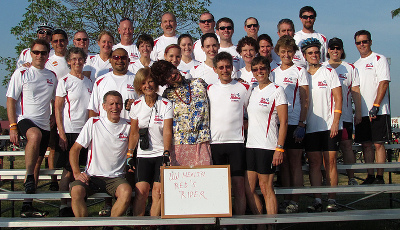 UW Health has hosted a corporate team for the event since 2003 and has consistently been recognized for the past several years as a top performing team and given VIP treatment along the way.

The cause is serious but the event is pure fun, and clever fundraising strategies often bring success.

David Jaehn from UW Health Information Technology Services promised he would ride in women's clothing if he raised at least $1,500.

As you can see from the photo, his friends took the bait - David raised more than $1,900 and kept his promise.