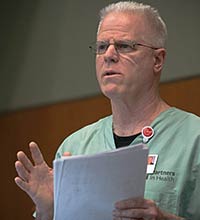 Madison, Wisconsin - No toilets, no tourniquets, no IV poles, no morphine. And dozens of desperately sick patients arriving every day.

Rosenthal, who works at the Odana Atrium Clinic, presented "The Chlorine Blues: An Eyewitness Report from an Ebola Treatment Unit in Sierra Leone" on March 30 to about 30 UW Health staff, many of them volunteers who have trained to take care of any Ebola patients who might come to UW Hospital and Clinics.

"I've never felt prouder to be a nurse," said Rosenthal of his experience with Partners in Health, a global-health organization he joined after closely following the news about Ebola and deciding to be part of the solution. "But it's the hardest thing I've ever done, both physically and mentally."

The Ebola epidemic can't be fully understood, Rosenthal said, without considering the conditions that made it possible: deforestation in West Africa, a practice that changed the migratory patterns of fruit bats and likely contributed to the initial infection of a child; extreme poverty; poor sanitation; and weak governments and social systems. The health-care systems of the three countries mainly affected were already fragile. And in Sierra Leone, life expectancy before Ebola hit was only 45 years. Rosenthal notes that the health-care systems of the affected countries virtually collapsed when some 400 health-care workers died of Ebola in a matter of months.

Rosenthal, a graduate of the UW-Madison School of Nursing who has experience in both emergency-department nursing and disaster relief, served at the 108-bed Ebola Treatment Unit called Maforki in Port Loko district.

His days began at 6am with a 'bucket bath' - there was no running water - followed by breakfast and a 40-minute walk to the treatment site. The pre-shift report he checked every morning showed who had died during the night, who had moved from a "suspect" to a confirmed case and who had recovered enough to be discharged to a village, orphanage or other hospital. While he was there, approximately 1,300 new Ebola cases emerged per week in West Africa and Maforki was at the epicenter of the epidemic.

Job 1 was the triage meeting at which a triage team and a treatment team were set. The latter consisted of "nationals" (Sierra Leone caregivers), a "sprayer" who would spray the doctors and nurses with chlorine and one or two caregivers from Partners in Health. Once patients were assessed and assigned, the nurses entered "the hot zone" where they would provide direct care. But that didn't happen until PPE (personal protective equipment) was properly donned. Rosenthal put on boots, his suit, a hairnet, three sets of gloves, his N-95 mask, an apron and a hood. The donning process had to be done meticulously to maintain safety.

"You can only stay 90 minutes to do treatment, because you start to sweat," he said. "We would turn our boots upside down and dump out all the water" at the end of the shift. The average daytime temperature in January is around 90 degrees and teams did two or three shifts a day. Because the shifts were so limited, each team had to go in with a detailed plan for patient care.

Massive fluid loss - up to 10 liters a day - is what kills most Ebola patients, so supportive care includes fluid and electrolyte replacement and treatment of secondary infections. (Patients treated in the U.S. might also receive ventilator support and renal dialysis if needed.)

But starting an IV "was one of the scariest things to do" in Maforki. The staff had to make do with a kind of duct tape - the only thing that would work to secure an IV line. Patients were often also severely malnourished and confused. His team eventually developed its own protocols for medication, IV fluids, treating confusion, anxiety, agitation or other infections and improving nutritional status.

When he started, survival of Ebola patients was only about 10 percent. By the time he left, it was close to 40 percent. Three of his health-care colleagues got Ebola; two of them died. But despite the suffering and loss, there were also 130 survivors at Maforki when Rosenthal left. That's what helped keep the teams going.

Rosenthal came back to the U.S. after six weeks. Under CDC guidelines he was designated at "some risk" so he spent three weeks in quarantine at a cabin in central Wisconsin.

He needed the time to reflect on the powerful experiences he had there, particularly the high percentage of children who were afflicted. More than 24,000 cases had been reported in West Africa by the time the epidemic slowed down and Rosenthal says the disease is significantly underreported.

"People talked of the 'War on Ebola,' " he concluded. "It is not close to being over."