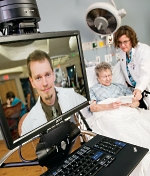 MADISON - Patients at UW Health Partners Watertown Regional Medical Center will now have instant access to stroke specialists at University of Wisconsin Hospital and Clinics, thanks to the signing of Wisconsin's first "Telestroke" agreement.

This Internet connection allows neurologists from the UW Hospital's Comprehensive Stroke Center to examine and talk with patients via Web cam, and shows them CAT scans and other tests as they consult with Watertown physicians to offer treatment advice.

The arrangement saves precious time for patients. A clot-breaking drug called rtPA (alteplase) must be given within three to four hours after the onset of an ischemic stroke, which is caused when a blood clot blocks blood vessels in the brain. Waiting too long to administer the drug can cause bleeding in the brain, or death.

"In the case of a stroke, time lost can equal brain cells lost," said UW Health stroke neurologist Dr. Justin Sattin. "This will give patients the expertise of a neurologist trained in stroke at their bedside in Watertown."

Sattin participated in a similar telemedicine program run out of the University of California San Diego Medical Center. A five-year study of that program, published in August in the journal Lancet-Neurology, found that telemedicine resulted in better decision-making than telephone consultations alone.

"There is no substitute for being able to see a patient and evaluate the stroke symptoms with your own eyes," Sattin said. "The biggest advantage is that it allows patients in any part of the state to get the same stroke assessment and treatment recommendations they could get at a comprehensive stroke center."

In many cases, "Telestroke" allows patients to stay in Watertown. But in more complicated cases in which they need to come to Madison for advanced care, the neurologists at UW Hospital will have already met and evaluated the patients. At UW Hospital, patients who need further treatment will have access to neurosurgeons and other physicians who specialize in less invasive procedures in which catheters are threaded into the brain to remove blood clots without surgery.

Nationwide, every year more than 700,000 people will suffer a stroke, which occurs when an artery in the brain is blocked by a blood clot or bursts and bleeds.

Women are now more likely than men to suffer strokes, and 40 percent of all strokes strike people younger than 60.

The UW Hospital stroke program recently received the Gold Performance award for achieving the American Stroke Association's top guidelines, and has been given a top award from the Joint Commission as well.

In addition to the stroke team, which is on call 24 hours a day, the UW offers: