The public health crisis of vaping-related lung injuries among children and young adults has arrived in Madison.

UW Health has treated at least 10 cases of lung injury in the past two months in which the patient admitted to vaping or using e-cigarettes with products containing nicotine, THC or CBD (cannabidiol).

One teen who said he nearly died from using e-cigarettes is Logan Krahn, a 16-year-old from Fort Atkinson, Wisconsin, who was the first patient treated by American Family Children's Hospital's pediatric intensive care unit because of vaping-related lung injuries.

He had a clear message for his peers: "If you don't smoke or vape, please don't start," he said. "But if you do, I urge you to get help and stop immediately."

Video: Dr. Vivek Balasubramaniam talks about the dangers of e-cigarettes and vaping, and Logan Krahn shares his near-death experience with vaping.

According to data from the Centers for Disease Control and Prevention (CDC) and Food and Drug Administration (FDA), in 2018, more than 3.6 million U.S. youths, including one in five high school students and one in 20 middle school students, used e-cigarettes during a one-month time period.

As of September, there were more than 800 cases of vaping-related lung injury reported from 46 states, and 12 deaths confirmed in 10 states. The U.S. surgeon general has called the use of vaping products by teens an epidemic.

According to Balasubramaniam, it's likely that the problem is even more widespread because many cases are misdiagnosed as pneumonia. UW Health doctors are examining previous cases for indications of vaping-related lung injury. 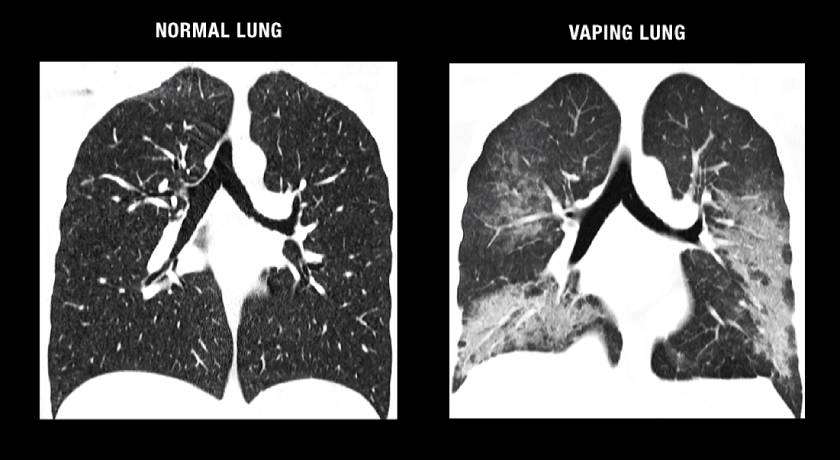 E-cigarettes heat a pod of flavored liquid that contains nicotine, THC or CBD oil to a high temperature that turns the liquid into an aerosol, which is inhaled directly into the lungs. The aerosol can contain harmful chemicals and is often concentrated — one nicotine pod can contain twice as much nicotine as a pack of cigarettes, making them highly addictive.

Balasubramaniam said he is especially concerned about the effect that the aerosolization of nicotine and non-nicotine products has on the developing lungs of children. The lungs grow and develop until they reach peak function at about age 25, but an injury during this time may result in diminished function and increased susceptibility to infection, limits on exercise capacity and higher risk for developing emphysema earlier in life.

Nicotine also has been shown to adversely affect brain development, which continues into a person's mid-20s.

What Can Parents Do?

Parents should be aware of signs of nicotine addiction, including:

Balasubramaniam also encouraged parents with children in middle or high school to have a conversation about the dangers of e-cigarettes and vaping. He also suggested parents reach out their pediatrician, family practitioner or primary care provider.