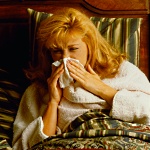 Madison, Wisconsin - UW Health physicians say that this season's increase in flu-like illness in Wisconsin is in stark contrast with 2011, one of the mildest flu seasons in recent memory.

"Flu activity last year was almost freakishly low," said Dr. James Conway, UW Health pediatric infectious disease physician. "We are seeing lots of early flu activity this year, which is more typical. Based on that, we can all expect the flu season to be worse than last year. How severe the season will be overall is unpredictable, which is why routine flu vaccines are so important."

Conway and UW Health infectious disease specialist Dr. Nasia Safdar acknowledge that flu cases spike after the holidays and when kids go back to school in January. But they say it's never too late to get a flu shot since the flu usually peaks in February.

"People should consider getting vaccinated as soon as possible, ideally before the holidays, family get-togethers and parties to increase the chances of flu immunity," said Safdar.  "But the flu season will continue well after the holidays have ended."

Conway noted that the flu vaccine protects against three viruses each year, but it doesn't guarantee that you won't get flu. The vaccine doesn't cover all strains that develop and mutate as the season goes on. Still, the vaccine, combined with preventive measures like frequent hand washing, provide the best protection against getting the flu.