DeForest, Wisconsin - The morning of Saturday, Oct. 4, was a cold, rainy and downright dreary day in southern Wisconsin. It was not the most ideal conditions for the annual Holy Hustle, a 5K run in DeForest that benefited St. Olaf's Catholic Church.

But for two DeForest families, the fates aligned for a life-alterting experience that day.

"The weather wasn't the best and I decided have a social run and enjoy it with my dad and friend Sue. I was not trying to win the event," said Reiche, who has been at UW Health for 15 years.

That turned out to be a life-changing decision for Reiche and 59-year-old Keith Popp.

Reiche and her two running mates were almost to the finish line, when they saw Popp, who was running in front of them, collapse to the ground. He wasn't breathing. 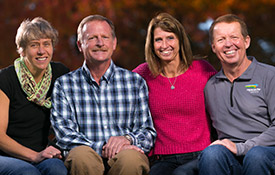 Reiche immediately began CPR compressions. Along with her dad and Weikert, they gave CPR until the police and ambulance arrived. They were able to shock him with a defibrillator. Popp began breathing and was treated and released at a local hospital.

Reiche credits her training to the CPR classes she takes at the UW Health Emergency Education Center.

"I am a dietitian but I have always taken CPR certification at UW Health. This is the first time I used it in the field. I heard my instructor Dale Dow's voice in my head and I can't believe how calm I stayed but I felt very prepared. We did CPR until help arrived," Reiche said.

Doctors told the family Keith had a cardiac arrest and they are not sure why the rhythm was off in his heart. Popp had a pacemaker defibrillator combination put into stabilize his heart and is now home resting. Those first moments after his collapse were crucial.

"I was told later that those four to five minutes we were doing CPR kept the blood flowing to his brain and it saved his life. In a case where seconds mattered, I am glad I was right there," said Reiche.

Popp and his wife Katherine are from DeForest and have been married for 37 years, with three daughters and three grandchildren. They are grateful for everyone involved.

"It truly was a miracle that Jean and her father were running right behind me. They saved my life. I walked my youngest daughter down the aisle at her wedding the Saturday before the race and I could have died a week later," said Popp.

Reiche understands the importance of being CPR certified and knows it's not just for the doctors and nurses.

"I said to my dad, during emergencies people always ask, 'Is there a doctor or nurse in the house?' Well, now they should add dietitian to the list," said Reiche.