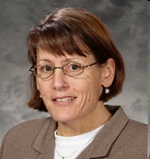 MADISON- Spray-painting a malignant tumor is one of the latest weapons in use against cancers in the airway.

Dr. Tracey Weigel (pictured), a thoracic surgeon with University of Wisconsin Hospital and Clinics, recently became the first surgeon in Wisconsin to begin using a liquid nitrogen spray to remove tumors and obstructions from patients' airways.

Interventional radiologists have been using cryoablation, a technique in which liquid nitrogen is used to freeze and kill tumors in solid organs such as the liver and pancreas, for several years.

"The big difference is that the radiologist uses a probe to get close to the tumor," explains Dr. Weigel, a member of the UW Carbone Cancer Center. "What we're doing is like using a laser for airway and esophageal obstructions. Except it's not actually a laser. We're 'spray-painting' the tumor with cold gas that immediately freezes it."

Dr. Weigel sprays the tumor/obstruction four separate times, freezing it and then allowing it to thaw. By the end of the fourth cycle, the tumor shrivels up and falls away.

"There are no scalpels involved," says Dr. Weigel. "While you're sitting there monitoring the procedure, it looks like snow has fallen in the patient's airway or esophagus."

Airway and esophageal obstructions, especially the larger ones that threaten a patient's ability to breathe or eat, can be especially tricky for surgeons to treat when they can't be removed surgically. Cryotherapy opens up the possibility of several treatment paths: With some patients, it represents an alternative or supplement to radiation therapy, when radiation might damage nearby organs or tissue or has failed to shrink the blockage. In other patients, it can remove blockages and open up the obstruction to allow radiation to be used to completely attack cancerous cells in the surrounding area.

Dr. Weigel also notes that cryotherapy is safer than photodynamic therapy (PDT), another common treatment that uses a photosensitizer to kill targeted cancer cells in certain types of cancer. After PDT, patients can't go into sunlight for about six weeks; cryotherapy is less expensive and the patient usually can go home the same day without any lifestyle or sunlight restrictions.

UW Hospital is currently the only one in Wisconsin using spray cryotherapy to treat airway obstructions. Dr. Weigel and her colleagues perform a procedure every few weeks.