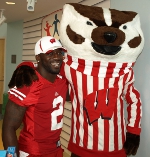 MADISON – It started out as a good reason for Derek Hildebrandt to come home, see his friends and family, play some golf and go to a University of Wisconsin football game. But it has turned into a good cause for patients at the American Family Children's Hospital.

Hildebrandt, a Madison native, created the Greater Bucky Open in 1997.

The event's name stems from the three years Hildebrandt spent portraying the Bucky Badger mascot at UW athletic events, and originally the proceeds from the annual gathering went to providing scholarship money to the UW students who volunteer to don the Bucky Badger outfit and entertain the crowds.

That is still the case, but the Greater Bucky Open has grown, both in participation and scope. The first one consisted of just 12 golfers; this year's event drew 130 golfers Sept. 24 at University Ridge Golf Course. And for the past 11 years, the GBO has been a fundraiser for  American Family Children's Hospital.

"Once we hit critical mass, we were like, 'We should give back bigger,' " said Hildebrandt, who added that approximately 90 percent of the proceeds from the GBO support the hospital.

Some of that support comes in the form of money - Hildebrandt said the group had donated just more than $140,000 through last year, and he estimated that this year's event raised approximately $20,000.

One of their gifts to the Children's Hospital is the Greater Bucky Open Family Lounge located in the Hematology/Oncology unit, an area for patients' families to relax during their stay. It was made possible by a $50,000 commitment from the GBO.

But the other part of the support comes on a more personal level.

Hildebrandt, who lives in Redondo Beach, Calif., joins several UW football players and Bucky Badger, of course, to visit with and distribute toys to patients at the Children's Hospital. This year, senior defensive back Jay Valai and three hulking defensive linemen - juniors J.J. Watt and Patrick Butrym and sophomore David Gilbert - hauled wagons loaded with toys to the girls and boys.

Watt is somewhat of a regular at American Family Children's Hospital.

He said that eight UW players meet with patients on Fridays during the weeks the Badgers have home games. "We're only allowed eight, so everybody tries to sign up as early as possible," Watt said. "There's a ton of guys who want to do it, but every Friday I get to go, so it's pretty exciting. I get my name on there real early."

Watt, a Pewaukee native who already has started his own foundation to help fund after-school sports programs for Madison-area children, said the visits to the hospital hold a special spot in his heart.

"It really puts things into perspective, when you're walking into a child's room and he's fighting for his life and you're complaining about running an extra sprint at practice or you're complaining about doing an extra lift (in the weight room). It puts things into perspective really quickly, how lucky we are to be in the position that we're in."

The 6-foot-6, 292-pound Watt and the other big guys with him - Butrym stands 6-4 and 284 pounds, while Gilbert is 6-4 and 240 pounds - seemed giddy about the opportunity provided them by the Greater Bucky Open.

"We're really excited about all the toys they've got here today for these kids," Watt said two days before the Badgers set a modern-era record for points in a 70-3 victory over Austin Peay. "We never have them to give to them on Fridays, so we're really excited to see their faces today."

Watt and the affable Valai chatted and played around with the patients with their new toys, while Bucky Badger added his unique twist to the trips down the hospital hallways and in the rooms.

"It's a bunch of goofy guys," Hildebrandt said of the fraternity of Bucky Badgers - there are seven playing the role this school year. "They're all really good, quality guys, but they're all a little off a little bit. Which I guess I am, too."