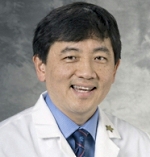 MADISON - The division of urology at UW School of Medicine and Public Health is about to become the department of urology.
Dr. Stephen Y. Nakada, (pictured) the David T. Uehling professor of urology who has headed the division since 2001, has been appointed chair of the new department. He will preside over a program that features 16 physicians, three endowed chairs, and more than $3.1 million in research funding from the National Institutes of Health.
The change in status from a division of the surgery department to a distinct department, however, represents much more than mere semantics.
Under Nakada's leadership, the number of faculty has doubled, and the division has become one of the most active clinical programs in the Midwest. U.S. News and World Report ranked the UW’s division of urology in the top one percent of programs nationwide in the 2007 edition of its annual America's Top Hospitals issue.
"What becoming a department does is to give us a direct line, as a distinct service and discipline, to the School of Medicine and Public Health, to UW Hospital and Clinics and the UW Medical Foundation," says Nakada. "In terms of achieving national recognition, this is critical for us, whether we're discussing the recruitment and retention of top-flight faculty or competing for research dollars."
Nakada notes that while 70 percent of academic urology programs in the United States are organized as departments, 18 of the top 20 urology programs in the country have that designation.
The new department's research priorities will include studies in prostate cancer development and treatments, clinical trials in bladder cancer prevention, and quality of life studies in recurrent kidney stone formers. The change will be effective July 1.