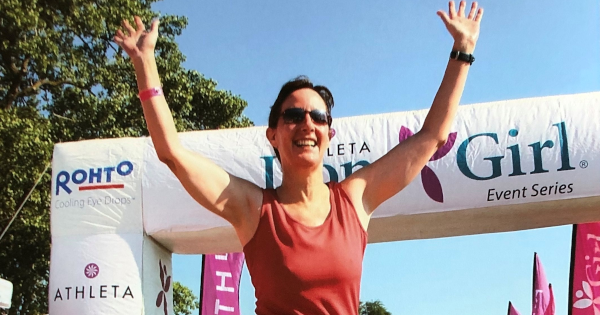 Judy Weidman was looking forward to a lot of things in retirement. Having to deal with cancer for a second time was not one of them.

In November 2018, the uterine cancer survivor had an MRI, which turned up the cause of her pain in recent years: a large tumor on her sacrum, near the base of her spine, known as a chordoma.

To say it was a surprise discovery would be an understatement. Bone and tissue cancers, known as sarcomas, are fairly uncommon to begin with, but chordomas are exceptionally rare. Only about 300 patients in the United States are diagnosed with one each year.

“That was three weeks after I retired, which was a bummer,” Weidman said.

Surgical removal of the tumor was the best treatment option, but for someone used to being active, the thought of being sidelined for an extended period of time was hard to grapple with. As a member of TEAMSurvivor Madison, an all-women group of active cancer survivors, Weidman participated in everything from triathlons to dragon boat paddling competitions.

She also felt apprehension after meeting with a handful of potential surgeons. Facing a complex and uncommon procedure, she and her husband Jeff wanted someone who really felt like the right fit. “We were terrified at the beginning, and we were still pretty terrified after meeting with everyone,” she said.

The couple expressed their concerns to their doctors at UW Health, who suggested they meet with the organization’s new orthopedic surgeon, David Hennessy, MD. He had previously been a resident at UW Hospital and Clinics and had recently returned after completing a fellowship in Boston.

“From the second we met him, it was a whole different feeling,” Weidman said. “We had the utmost faith and confidence in him.”

Hennessy specializes in total joint replacement of the hip and knee, but also treats adult and pediatric patients with bone cancers, often in conjunction with medical and radiation oncologists at the UW Carbone Cancer Center. 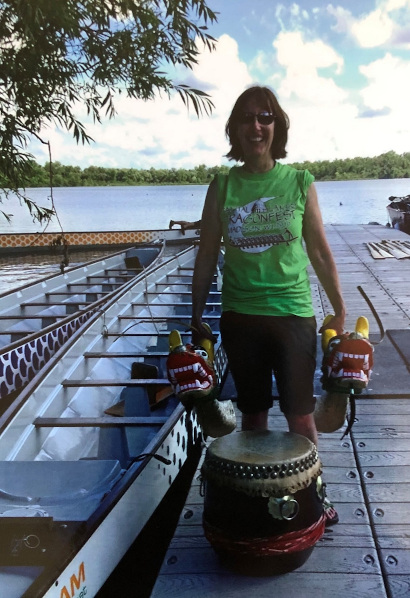 Weidman was drawn to Hennessy because he had done chordoma surgery before, but she also appreciated his candor and confidence. While most of the surgeons she met with spoke about what could go wrong with the procedure – any surgery near the spine is tricky – she says Hennessy didn’t treat those outcomes as inevitable.

And when the surgery works, it really works. As long as the cancer has not spread, Hennessy says musculoskeletal tumor surgeries usually provide good curative outcomes. “In these cases, we’re generally very successful in removing the cancer in its entirety, and then these patients typically have a long period of disease-free survival,” he said.

However, if the cancer has metastasized, Hennessy says treatment options become more challenging. “Sarcoma is a very hard disease to treat with chemotherapy, and there aren’t a lot of targeted therapies for it,” he said.

Only about 15,000 bone and soft tissue sarcomas are diagnosed every year and can be broken down into more than 70 subtypes. Because of the low number of cases and high tumor diversity, finding enough patients to get a clinical trial off the ground to test new therapies is difficult.

But efforts are underway to change that. Recently, the American Academy of Orthopedic Surgeons and Musculoskeletal Tumor Society collaborated to launch the Musculoskeletal Tumor Registry. The new database allows providers like Hennessy to upload information about the tumor, as well as information about a patient’s treatment and post-treatment outcome.

Along with increased genetic testing, this information gives researchers a foundation to build upon in the future. “I may only see 50 sarcomas a year, but if everyone who does the same sort of surgery that I do contributes to this national registry, we’ll have thousands of cases to study,” Hennessy said. “In addition, having these genetic profiles really opens us up to the possibility of clinical trials and targeted therapies in the future,” he said.

Fortunately for Weidman, her cancer hadn’t spread, and her faith in Hennessy’s confidence paid off. In February 2019, her surgical team successfully removed all of the cancer from her sacrum. “Obviously, it wasn’t just talk, because he carried through,” she said. “I got the best possible outcome I could have gotten, and now I’m happy and healthy.”

Recovery after these types of surgeries can be long and taxing. When bone or muscle is removed, patients may need anything from crutches to several months of physical therapy. After being released from the hospital, Weidman relied on a walker to move around, but her sights were already set on bigger things. “My first goal was to get down to the end of the driveway, do a circle around the big snow pile, and then come back up,” she said. “And I just went from there.”

It didn’t take long before she was back to participating in the activities she loves, including paddling the dragon boat. While she admits that her recovery felt difficult at times, she was also amazed at the progress she was able to make in such a short time. “I was back in the boat with my team three-and-a-half months after surgery,” she said. “When they launched the boat for the season, I was in it. I did three races last year. It was unbelievable.”

Hennessy says he’s happy to see her doing so well – she’s been cancer-free since the surgery – and checks in with her from time to time. As for Weidman, she’s quick to give a special shout-out not only to Hennessy, but to the entire care team that helped her through the process.

“I was so impressed by the teamwork,” she said. “I know they all worked together and coordinated and did an unbelievably fantastic job.”