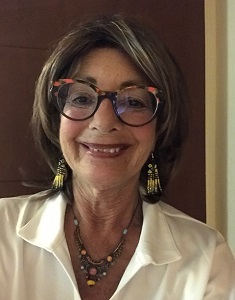 At the time she became a patient at the UW Carbone Cancer Center nearly a year ago, Laura Thomas was living her best life. She was excelling at her job as a conference and events planner, where she organized meetings across the country. She spent time with great friends. And she was in love.

“I had a perfect life,” Thomas says, looking back on this time in her life nearly a year ago. “I still do. I’m one of the lucky ones who loves my work. My work probably improved, as I was obsessed with everything being perfect. I also fell in love with a beautiful man and that sweet tenderness and charm took over anything else going on. I was a senior citizen no different than a seventh grader, living for his next call.”

Then came the car accident. Thomas hit a parked car near her home – but she had no idea she had been in this accident until someone out on a walk told her what happened.

Reflecting on her need for perfection and her middle school-like “crush,” the jarring accident prompted Thomas to go to the hospital for delirium. The doctors found a cause: she had lung cancer that had metastasized to her brain.

“She had multiple lesions in her brain and disease on both lungs, and she was delirious for sure,” says Anne Traynor, MD, Thomas’s oncologist at UW Carbone. “After she received whole brain radiation for the brain metastases with Dr. Steven Howard, I saw her in clinic, and her thinking was clear again.”

The pathology report on Thomas’s biopsy showed she did not have any of the lung cancer mutations targetable with chemotherapies. However, her cancer did show high levels of an immune suppressive protein, PD-L1. Traynor thought the protein expression made Thomas a good candidate for a clinical trial with the anti-PD-L1 immunotherapy drug, Atezolizumab. The drug is approved for lung cancer patients as a second or later line of therapy. At the time of Thomas’s diagnosis, UW Carbone was accruing patients for a clinical trial that sought to identify if the immunotherapy can be used as the first line of care for some lung cancer patients.

Traynor asked Thomas if she would be interested in the trial.

“I only had two imminent questions: Where’s a pen and where do I sign?” Thomas recalls. “I have been aware of medical clinical trials for the past 30 years working in meetings operations and support. I cannot say I chose to volunteer for the trial because I wanted to help the future of mankind. I do – but I wanted to get well myself and had complete faith that this treatment would work.”

Thomas quickly grew to trust what she calls Traynor’s “no-nonsense science and compassion.”

“I had placed deep trust in Dr. Anne Traynor and the team we came to be. I never saw myself going into this trial alone, only as part of our team,” Thomas says. “I basically figured, if Dr. Traynor’s doing it, I’m doing it.”

True to Thomas’s assessment of her oncologist, Traynor used science and reasoning to conclude that Thomas might be a good candidate for the trial.

“The fact that she had such high PD-L1 protein expression in her lung cancer cells, I thought it would be a favorable factor for her responding, but I never imagined this. This is the best I’ve ever seen,” Traynor says, adding that Thomas currently has no evidence of disease.

To be fair to Thomas now, she is still living her best life. Her job is still going well, she has a wonderful support network of friends who accompany her to appointments and she is pursuing writing and standup comedy. The only difference now is that her life is grounded in a reality that the brain metastases did not afford her a year ago.

Well, mostly a reality. About that love of her life she may have slightly over-exaggerated?

“I haven’t heard from him in eight months, but who knows, tonight could be the night!” Thomas jokes.