Trouble in Toyland: Be Aware When Shopping for Children's Toys

Trouble in Toyland: Be Aware When Shopping for Children's Toys 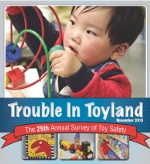 MADISON - The best holiday gift for Bruce Speight would be the end of the U.S. Public Interest Research Group's annual "Trouble in Toyland" survey of toy safety.

But he knows that's a wish that isn't likely to come true.

"That's the goal, to eventually not have to do this report because there's not a hazard on the market," said Speight, in his 13th year as director of the Wisconsin Public Interest Research Group. "Will we ever reach that day? It's the gold standard, but I don't know if it's realistic."

Speight presented the 25th annual "Trouble in Toyland" survey to the media along with Nicole Vesely of Safe Kids Madison and Michelle Reinen, director of the Consumer Protection Division in the Wisconsin Department of Agriculture, Trade and Consumer Protection.

And despite the continuing need for the report, the news isn't all bah hambug.

"But we haven't solved the problem yet and there's still work to do."

Improved Regulation of Chemicals, But Not Complete

Yet WISPIRG and other public interest research groups across the country would like to see the CPSC's regulating authority further increased.

"For example, the CPSC now has the authority to regulate 14 toxic chemicals in toys and children's products, but there are tens of thousands of chemicals on the market for which there are little to no safety testing," Speight said. "Our children are the most vulnerable to toxic chemicals, so we need to do more."

Speight displayed examples of toys found on store shelves this fall that violate the legal limits of chemical levels or include chemicals not on the banned list.

A children's backpack also was highlighted, because part of it contained phthalates, which are used to soften plastics and have been connected to adverse reproductive and developmental health affects.

The use of six types of phthalates in toys and children's products are regulated thanks to the Consumer Product Safety Improvement Act, but that means that just "one-tenth of 1 percent of phthalates are banned," according to Speight.

"The backpack contains a phthalate at 15 percent, but that phthalate isn't banned," Speight said. "This is further evidence that we still have work to do in protecting kids from toxic chemicals."

By Any Measure, Choking Hazards Remain

USPIRG's other message this holiday season is a recurring one: Preventing children from choking on small toys.

Over the past three years, 15 children nationwide have died from choking or asphyxiating on a toy or toy part. And it's the leading cause for CPSC recalls, with 5.8 million toys taken off the shelf in the past year for being choking hazards.

However, there isn't a consensus on how to measure such hazards.

The CPSC uses a small, plastic cylinder to test whether a toy is a potential choking hazard. Those that fit in it are banned for ages 3 and under, and a prominent warning label is put on toys for children ages 3 to 6.

"But children have choked on toys that pass the test," Speight said, adding that USPIRG suggests using an empty toilet paper roll as a better test cylinder.

The public interest groups wrote a letter to the CPSC calling for a more scientific review of the small parts standard, and plan to follow up with a formal petition for a review. Consumers can add their names to the petition at toysafety.net.

'One Toy-Related Injury is Too Many'

Other tips on toy safety include:

"From our perspective, the health of our kids should be first and foremost - that's why we keep at it," Speight said of the "Trouble in Toyland" report, which has led to more than 150 recalls and other actions during its tenure.

"And I think it's just important that parents and consumers are getting reminded each year of some things to look out for, to make sure we are preventing injuries from happening. Because one toy-related injury is too many."