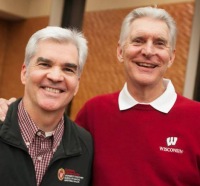 Raising more than $15,000 at the newly opened Gordon Dining and Events Center on campus, 36 teams competed in a broad array of categories for top prizes. The focus, however, was on the camaraderie and the cause. Their host, two-time U.S. Open winner and ESPN golf analyst Andy North spoke in his opening remarks to an understanding crowd of how cancer impacts everyone in one way or another.

"I can't attest to the accuracy of all my answers," says Lubner, who researches gastroenterological cancer at UW Carbone Cancer Center and treats patients on a regular basis. "The important thing is that we raised an additional $1,000 that night!"

UW Carbone Cancer Center Interim Director Howard Bailey, MD, was also there to thank the guests - and join in the fun.

"It was a pleasure to see participants of all ages come together with their friends and family to support cancer research and learn about our great institution - all while having a great time," he said.

Trivia night was Allison Dungan's first Cancer Center event, and she had a blast with her friends.

"As someone whose life has been touched by cancer," she said, "sometimes it can feel lonely. But with such a large and diverse community present last Thursday, I felt anything but alone. My team was glad to contribute to such a worthy cause."

It was spirited joviality and a good-natured competition that ruled the evening, but North didn't let attendees leave without knowing another important fact: "You don't have to go across the country to receive the best cancer treatment – it's going on right here in Madison at UW Carbone," he said. "Supporting this cause means you're also helping some of the world's best scientists do groundbreaking cancer research, so that more people down the road can say they beat this disease."