Health Facts for You 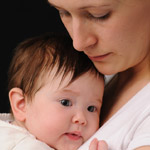 MADISON - For a number of pregnant women, the joy of childbirth can be followed by several weeks or months of a negative mood that can adversely affect the mother and her relationships with her newborn and partner.

Roseanne Clark, PhD, a psychologist and associate professor of psychiatry at the University of Wisconsin School of Medicine and Public Health, says up to 80 percent of women suffer from what are called "postpartum blues" caused by lack of sleep, fluctuations in hormone levels and other factors.

But if the problem persists for longer than two weeks, the mother could be suffering from postpartum depression, which requires evaluation by a mental health professional.

According to the Centers for Disease Control, postpartum depression affects 10 to 15 percent of mothers within the first year of giving birth. The rates are much higher for teen mothers or those with less than 12 years of education, women living in poverty and those who have been victims of physical abuse.

Some emerging evidence suggests that boosting intake of omega-3 fatty acids (found in a variety of foods and in over-the-counter supplements) may help prevent the disorder.

"Women in this country are going into pregnancy omega-3-fat deficient," says Jill Mallory, MD a family-medicine physician who uses integrative-medicine approaches in her practice. "Babies are little sponges that suck omega-3 out of women because the fats are used for brain and eye development. Trying to prevent that depletion upfront is the key."

Clark, who is director of a National Institute for Mental Health (NIMH) funded study of postpartum depression treatment, says group psychotherapy sessions involving the mother, her infant, and the infant's father have proven beneficial in treating women with postpartum depression.

"Individual therapy can be helpful, but we found that when mothers are involved in therapy groups where they discuss their experience of depression with other mothers, that they feel validated, greater understanding and an increased sense of social support, according to women who have participated," she says.

Women with postpartum depression who are in group therapy also tend to continue in therapy rather than dropping out, which is more common for women in individual psychotherapy.

"Husbands and partners have their own sessions where they discuss their experience of their partner's depression, their own needs, those of their baby and partner and how they can offer empathy and support to her," says Clark. "We think it's important to treat the relationships as well as the depression."

Women learn in group therapy how to provide the attention and care that their infant requires while also attending to their own needs. They also learn ways to reduce symptoms of anxiety, which often accompanies depression in the postpartum period.

"Women often feel guilty if they are not joyful or playful towards their baby because they are depressed," says Clark. "Following the mothers' group therapy session, mothers meet with their babies in a mother-infant therapy group in which we use music, songs, infant massage and baby games to support the mother in trying enjoyable ways of interacting with her baby despite her low mood. The focus is on improving the relationship between mother and child as well as addressing the mother's need for emotional support and her sense of competence in the mothering role."

In more severe cases, mothers may be prescribed medication, especially if they have thoughts of harming themselves or their babies. Clark says in these instances, friends and relatives should listen to the mother's needs, encourage her to seek help immediately, and make sure she is not left alone with her baby or other children if she is not feeling safe.

"Many mothers are afraid to confide in loved ones, and this may leave them feeling isolated because they think their babies could be taken away if they share the thoughts they are having," she says.

These thoughts may consist of obsessive ruminations about harm being inflicted on her baby or may reflect psychotic symptoms including voices telling her to harm her child. About one percent of mothers experience a postpartum psychosis. In both cases, women should be seen immediately for a psychiatric or psychological evaluation by a provider with experience in postpartum mood disorders.

According to Clark, symptoms of postpartum depression often subside in three to four months as psychotherapy and, if necessary, medication, start to work.

"By then, women are aware of possible triggers that may be contributing to their postpartum depression and have learned effective strategies for coping such as being with others who are supportive, exercise and time for themselves and activities that they enjoy and a greater sense of competence as a mother." says Clark.