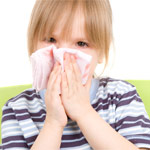 MADISON - Tilt your head back to stop a bloody nose?

That old-fashioned advice for kids is just plain wrong.

Unfortunately, there's a lot of misinformation on how to stop this common childhood malady.

Diane Heatley, MD, associate professor of surgery (otolaryngology) at the University of Wisconsin School of Medicine and Public Health, says old-time remedies like lying down or holding the head back will not work, because children's nosebleeds usually start in blood vessels in the front of the nose.

"If you make the child lie down or hold back the head, blood will run into the throat and make the child choke," she says. "The child should actually sit up and lean forward so blood can enter the front of the nose, and then gently apply pressure by squeezing the nostrils together for at least five minutes until normal clotting occurs."

"A cold cloth or small ice pack on the bridge of the nose will also slow blood flow by constricting blood vessels -- if your child will tolerate it," she adds. "But an ice pack on the back of the neck won't do much."

Heatley, an ear, nose and throat specialist for children, says nosebleeds most frequently happen in the fall and winter when indoor heating systems can dry out the air as well as a child's nostrils. This often makes the nose crusty and itchy, and kids seek relief by rubbing or picking at it.

"Since nosebleeds result from dryness, the inside of the nose should be kept moist to reduce the irritation," she says. Heatley's specific tips for prevention:

However, Heatley encourages parents to get their kids to a doctor if nosebleeds occur at least twice a week over an extended period of time. In those rare cases, surgery may be required.

"Nosebleeds will stop 99 percent of the time if the child applies pressure to the nostrils, and keeps fingers and other objects out of them," she says.