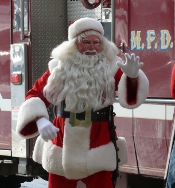 MADISON - A retired Madison firefighter who has dressed as Santa for 43 years made his final appearance at American Family Children's Hospital Wednesday.

Dick Lindauer, 73 years young, dressed as Old St. Nick and accompanied by an entourage of elves, arrived at the hospital at noon courtesy of a Madison Fire Department escort. He handed out presents to patients in the main lobby, visited hospital rooms and offered words of encouragement to the young patients and families.

In 1967, he started playing Santa when Fire Captain Art Emerson stepped down from that role.

"He asked if I would be interested in being the project manager or Santa Claus," Lindauer recalls. "I said I would do both."

Lindauer began flying to the hospital via helicopter when Med Flight was introduced to UW Hospital in 1985.  Since 2008, he has arrived on a sleigh propelled by a fire truck.

Lindauer’s daughter died at UW Children's Hospital in 1978 at age 15 after a four-year battle with leukemia.  He says her passing has given him the inspiration to perform his duties as Santa every holiday season.

"There were so many kids I visited that were gone the next year," he says. "That's the part that hits me because of my daughter."

While Lindauer's daughter lost her fight with cancer, fortunately the picture for most kids now is far more hopeful; National Cancer Institute statistics indicate survival rates from childhood cancers have increased substantially since the late 1970s.

Lindauer, who retired from the fire department in 1995, says he will always appreciate those who helped make the job of playing Santa a lot easier.

"I can’t thank the people enough who have been good to me," he says. "I couldn't have done this alone. I never had anything to worry about. All I had to do was make a phone call and someone was always there to help. Med Flight and the Madison Fire Department treated me fantastic."

Eventually, Lindauer’s Santa suit will be sent to Superior to be displayed at the Wisconsin Fire and Police Hall of Fame, where Lindauer was inducted in 2003 for his devotion to community service.

Madison firefighter Gary Schreiber will take over the role of Santa next year.