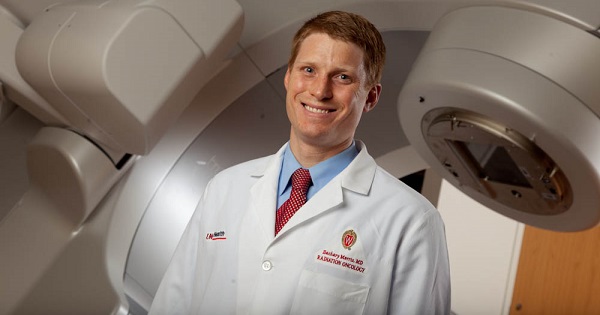 Vaccines against an infection work by training the immune system at the site of injection and then spreading those educated immune cells throughout the body.

UW Carbone Cancer Center researcher Zachary Morris, MD, PhD, thinks that same immunotherapy concept can be applied to fighting cancer, especially metastatic cancers where cells from the initial tumor have spread to other parts of the body.

“We’re working on vaccinations against metastatic cancer, where we target one of the tumor sites and generate such a robust local anti-tumor immune response that the immune system will then have an effect on the other distant sites,” Morris said. “We think our approach, where one site becomes the higher education center for the immune system, will give us the best chance to improve patient outcomes.”

Calling immunotherapy one of the most exciting areas of oncology over the past several years, Morris pointed to the checkpoint inhibitor drugs being used to effectively improve outcomes for some cancers. Cancer cells often evade destruction at the hand of the immune system by engaging checkpoint receptors on immune system T cells. When engaged, the cancer cell is telling the T cell it is a “self” cell and should be left alone. Checkpoint inhibitors block that interaction, allowing the immune system to recognize the cancer cell for the harmful cell it really is.

“The checkpoint inhibitor drugs tend to work better on cancers that have lots of mutations, such as melanomas, and we think they do not work as well on cancers with lower mutation burdens,” Morris said. “But we think they could, it just may take more training of the immune system. So now we’re trying to look at other types of cancers that haven’t been responding to checkpoint inhibitors.”

Morris and colleagues are adding two treatments, in addition to checkpoint inhibitors, to effectively create an immune system-educating vaccine from the tumor itself. One of these treatments is radiation.

“Radiation kills cancer cells by causing DNA damage, but it also increases the levels of DNA that are found outside of the cell nucleus, in the cytoplasm. Typically a cell is exposed to DNA in the cytoplasm only if it’s been infected by a virus,” Morris said. “Radiation treatment, then, appears to activate pathways in the cell so that it acts as if it’s been virally infected, drawing in the immune system.”

“The engulfing immune cell shows those proteins to other immune cells, teaching them which proteins to go look for on other cancer cells,” Morris said. “And because the metastatic cells share many mutations with the cells at the treatment site, the immune system should be trained to target even those “resistant” cells that lack the target of the injected antibody .” 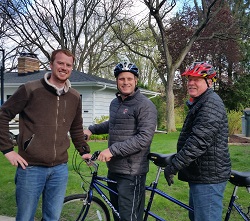 With the immune system boosted and the cancer cells’ defenses weakened, Morris and his team are beginning to see better survival outcomes in mice with metastatic cancers that previously did not respond well to checkpoint inhibitors alone. He expects to see this work translated into human clinical trials in the next few years.

For Morris, he is “over the moon excited” to be conducting this research. It is being funded in part by money raised through The Ride, an annual bicycling event that raises money for cancer research at the Carbone Cancer Center. His family, including his parents and two children, participated in The Ride last year. They are all training and riding together again, though he added that this year has been especially tough.

Learn more about why Dr. Morris will be riding

“My dad was diagnosed with an incurable brain tumor this spring,” Morris said. “He’s lost the entire right field of vision, so he can’t steer a bike but he can balance. We bought a tandem bicycle and are riding together in The Ride this year.”