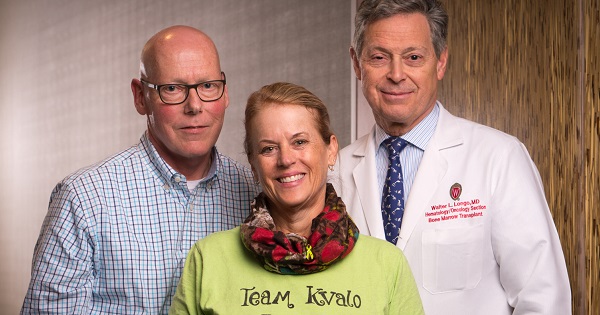 Couples go through the cancer experience together, even when the disease separates them into the patient, and the support person.

Consider where Mike and Robin Kvalo, of Portage, found themselves the first Saturday of October 2016.

Mike was an inpatient on B6/6, extremely ill after intense chemotherapy and the autologous stem cell transplant that his oncologist Dr. Walter Longo had recommended to fight his T Cell Lymphoma.

He wasn’t well enough to get out of bed that day, but if he could have peeked out the window, he would have seen walkers and runners lining up for annual UW Carbone Cancer Center Race for Research.

Outside the hospital, Robin Kvalo was leading a team of 33 walkers wearing lime green “Team Kvalo” T shirts and wrist bands. It was her way of making sure that research continued on her husband’s disease.

Join the Kvalo family at this year's Race for Research on Saturday, October 7. Register today at carbonesrace.org

“I know that Michael’s stem-cell transplant is all there is right now, so if this doesn’t work, there’s nothing else,’’ she says. Research is key, agrees Dr. Longo, who is currently running a clinical trial aimed at developing a better treatment for lymphoma and other blood cancers. That trial offers hope to patients who have exhausted their conventional treatment options.

Mike Kvalo was diagnosed in April 2015, but the family’s relationship with Dr. Longo started before that. He had been treating Robin’s father for a different type of lymphoma for years.

“My parents really love him,” she said.

And when Mike’s Dean Clinic oncologist, Dr. Alissa Weber, decided that he needed a stem-cell transplant, she referred him to Longo at Carbone. Meanwhile, his sister reached the same conclusion.

“My sister did a lot of research. She called me at work and said, ‘I’ve found out there’s this lymphoma doctor who is really, really great. You have to get him.’ When I could finally get a word in edgewise, I said, “Martie, I already have Dr. Longo, I am in good hands.”

Mike is currently engineering manager at EVCO Plastics in DeForest, and has worked at engineering jobs his whole career: “I’ve built factories and homes and medical devices.” In fact, the BardPort he uses for his chemo was made by a bio-medical engineering company where he worked years ago.

An Engineer's Perspective on Cancer Treatment

He looks at his cancer journey from an engineer’s perspective. Dr. Longo had good news at an appointment about six weeks post-transplant. Mike’s red blood cell counts had improved to the point where he is feeling much better and his white cells were also in the normal range.

“Everything is going in the right direction,’’ Mike responded. “But it’s a process. You have to keep plugging along, that’s cancer.”

He also finds the cancer experience has a lot in common with an engineering project:

“This is a project and I recognize that the team means everything. I know that’s how it works on every project I’ve involved in. Team members need to be empowered to make decisions, that is when everything works the best.”

Kvalo says he saw that teamwork in action when he was an inpatient on B6/6 during his stem-cell transplant. He was especially impressed with the team work of his main nurse Kristin Powell.

“It was a team atmosphere,’’ he says, “and everyone’s job was important.”

Robin, meanwhile, was feeling that she also wanted to be part of the recovery team. The couple met at UW-Madison in the 1980s – their first date was a Badger football game – and have now been married 35 years.

When she got active on social media to raise money for Team Kvalo, the couple heard from friends across the country. That was a boost to Mike, who said, “The nicest thing about having cancer is that you get to see the very best of people. We heard from people we hadn’t seen for 20 years, who reached out and donated. For folks to be able to do something for a good cause, to help young people with cancer, made them feel good.”

Since 1993, the couple has lived in Portage, where they raised their two sons and where Robin is principal of Portage High School. She received the Herb Kohl award as Principal of the Year in April 2016.

The Portage community came through for the Kvalos. At the high school homecoming assembly, the student health occupations club announced they had raised $150 for Team Kvalo.

“They presented me with a bouquet and a donation to Carbone and said lots of kind words about me and wished Michael well,” Robin says. “My community of Portage is just amazing.”

When Robin formed Team Kvalo, she hoped to raise $500. But Team Kvalo went far beyond that, claiming the top team award at the 2016 UW Carbone Cancer Center Race for Research, and bringing in more than $8,360 for cancer research.

“I wasn’t able to do much for Michael, so the race was a great outlet for me, knowing that it was something I could do for him,’’ she says.

Be a part of the team and make a difference in the fight against cancer. Register for the 2017 Race for Research at carbonesrace.org