Swimming for a Cure

Swimming for a Cure 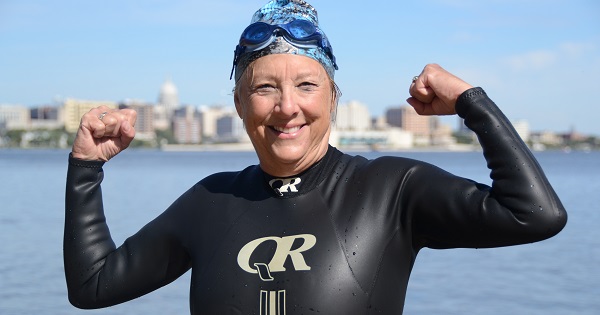 Mary Gooze is many things: a retired teacher, healthy living advocate, accomplished writer, wife and mother, amongst many others. In 2014, when she was diagnosed with metastatic breast cancer (MBC), she pooled together her many roles into one. Now, Gooze is swimming her way towards raising awareness, funds and advocacy for MBC.

29 lakes (or really, bodies of water) and 43 miles later, Gooze’s “One Woman, Many Lakes” project is well on its way to helping her achieve her goals of raising awareness, funds and advocacy for MBC. But one goal still eludes her.

“We need a cure. Because metastatic breast cancer is incurable,” Gooze said. “It’s the process of educating people and getting the word out. Everybody knows about breast cancer, but metastatic, most people just have no clue.”

Once breast cancer spreads to other sites in the body, physicians can only help manage symptoms and provide treatments aimed to slow the cancer’s growth. Every day, 113 people die from MBC, also called stage four breast cancer. Gooze is realistic about her disease and knows she will die from it. But that has not stopped her from fighting for awareness and a cure.

“When I was diagnosed, I was training for a two and a half mile swim in Seattle, and I did it. I was very tired, but I did it,” Gooze said. “It was just such an empowering feeling. I thought, ‘OK, I can’t beat cancer but maybe I can spread awareness.’”

The following spring, Gooze, her husband, Rob, and their dog were at Lake Patagonia in Arizona. She set up a sign stating that she was searching for funds for metastatic breast cancer research, donned a wet suit (the air was in the mid-80s, but the water was a balmy 56 degrees) and swam two miles. When she returned to shore, a man there asked what she was doing and wrote her a check after she explained.

“I thought, ‘Maybe this will work!’” Gooze said. “From there I just started swimming lakes and educating people.”

In addition to spreading awareness about what MBC is and how it is a terminal disease, Rob and Mary Gooze are passionate advocates in advancing research and policy affecting MBC and other metastatic cancer patients. They have both met with U.S. legislators, including Senator Tammy Baldwin, and they arranged for Mary to have a one-on-one meeting with House Speaker Paul Ryan.

“There are a lot of Facebook groups for metastatic breast cancer, so when I knew I was meeting with Paul Ryan I sent out a plea and asked, ‘What do you want me to say?’ We got over 150 responses, some heartfelt and many on research and affordable health care,” Gooze said. “Did it do any good? I don’t know. But they have to hear it and it might make a difference.”

The Goozes are also enthusiastic fundraisers for research towards a MBC cure. They said that while breast cancer as a whole receives a significant amount of research dollars, an estimated less than 10 percent goes towards MBC. After meeting with the UW Carbone Cancer Center’s Ruth O’Regan, MD, chief of the division of hematology/oncology and MBC researcher, they started a fund at UW called “More for Stage Four.” All proceeds from One Woman, Many Lakes and related fundraising now go into this account.

UWCCC physicians Kari Wisinski, MD, and Mark Burkard, MD, PhD, and O’Regan help the Goozes direct the funds. In December 2016, More for Stage Four funded research in the lab of Josh Lang, MD. His group studies circulating tumor cells, or CTCs, that are metastatic cancer cells traveling in the bloodstream. Lang expects that his research can be moved into clinical labs in the next several years, where physicians can perform a non-invasive blood draw (“liquid biopsy”), isolate CTCs and study features of the cancer.

“Research is our best hope,” Gooze said. “But research can’t be research without dollars behind it. And if we find a cure for metastatic breast cancer, it could lead to a cure for all cancers.”

For more info on the Goozes and One Woman, Many Lakes, please check out their website or Facebook page. You can read Mary’s award-winning blog, which chronicles her life since her MBC diagnosis.