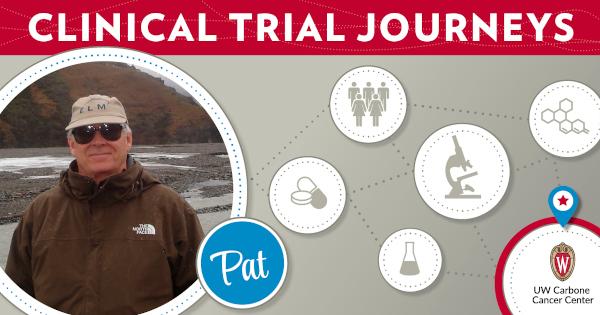 After a while, Pat McGuire told his doctors to stop telling him his PSA score. It was just stressing him out.

Having undergone numerous tests, treatments and surgeries, he was tired of seeing the score trending in the wrong direction. At one point, it was hovering right around 100, which confirmed what he already knew: he had aggressive prostate cancer and it wasn’t getting much better.

While his father and grandfather both had the disease, nothing could quite prepare him for his own diagnosis in 2015, as well as the diagnosis he received after the surgical removal of his prostate: stage IV metastatic cancer.

“It really floored me,” he said.

But nearly five years and three clinical trials later, the 73-year-old Plymouth, Wisconsin resident is finally moving in the right direction, with help from the UW Carbone Cancer Center.

He credits his involvement with clinical research as the reason he’s still alive today. “I got involved in clinical studies because I thought it was my best chance to get access to the front-end treatments that were coming down the line for prostate cancer,” he said. “I just didn’t feel comfortable that the traditional treatments would have been effective.”

Stage IV cancer remains a difficult disease to treat. Because it has spread to other parts of the body – in McGuire’s case, it was initially his lymph nodes and later his bones – the disease is hard to control and manage. So after his initial prostate surgery, he went searching for options at UW Carbone that would give him the best chance of fighting the cancer.

The first clinical trial he participated in was a DNA vaccine trial under the care of Douglas McNeel, MD, PhD, an expert in prostate cancer immunology. However, after a year on that study, McGuire’s PSA continued to increase. To make matters worse, his cancer had spread to his hips and pelvis and required radiation treatment.

He then moved to a second clinical trial for a targeted therapy known as IMMU-132, this time under the care of Joshua Lang, MD. After several months on the trial, McGuire experienced issues with balance and walking. The cancer had spread once again. This time, it was a tumor placing pressure on his spine which required surgery.

Around this time, Lang ordered a blood test for McGuire, who was still hopeful something could be done to control the cancer. The test turned up an expected result: a BRCA2 gene mutation in McGuire’s DNA. While BRCA2 mutations are often associated with breast cancer, they have also been linked to an increased risk of prostate cancer.

This made him eligible for a new clinical trial involving a targeted therapy known as a PARP inhibitor. PARP inhibition effectively shuts down one method of DNA repair in an attempt to kill cancer cells. The PARP inhibition method has seen some positive results in breast cancer clinical trials, and is now being studied in patients with other forms of cancer.

For McGuire, the third time was the charm. “Within about a month of getting on the PARP inhibitor, I could tell there was a difference,” he said. “I had been having pain in a number of different places in my body, and it just went away.”

His care team also noticed a significant change in his PSA score. And this time, they figured he’d might actually want to know his number.

Since then, things have been going well for McGuire. He’s been on the PARP inhibitor for about one year, and his PSA remains low. He’s able to take the drug at home, but still travels to Madison about once a month for blood tests and other follow-up work.

Throughout his five year cancer journey at UW Carbone, he’s had plenty of time to interact with his nurses and doctors, and speaks incredibly highly of them. But it’s clear he’s also made an impact on those that have cared for him.

In the days and weeks after his initial stage IV cancer diagnosis, McGuire says his mind went to some pretty dark places. But he says it was clinical research, and the prospect of benefitting future cancer patients, that gave him a much needed change in perspective.

“I got hope by looking at these clinical studies,” he said. “Once I started getting involved in these trials, I started being positive again.”