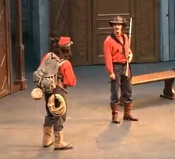 He was the star of a production that Terry Teachout, the esteemed drama critic at the Wall Street Journal, called "the best show of any kind I saw in 2011."

But as Susan Sweeney, the theater's head of voice and text, listened to Daniel's performance, night after night through the headphones, she didn't like what she was hearing.

"I could tell that his voice didn't have its usual range,'' says Sweeney, who recently retired as a UW-Madison drama professor. "His voice sounded tired."

It wasn't only the agonized shrieking required to play Philocetes. Daniel, a member of APT's core company, spends the off-season bringing drama to school classrooms through APT's outreach program. And there's no rest for his voice at home, either, as he is the father of three small and rambunctious boys.

So Daniel went to the UW Health Professional Voice Clinic for help.

There he was evaluated by Dr. Seth Dailey and received therapy from Emerald Doll, MS, CF-SLP, a speech language pathologist. Doll, who is herself an actress and singer, knows the stresses on the professional voice.

She provided voice therapy, which included new vocal techniques such as how to warm up and warm down his voice and how to safely perform vocal tasks which can be harmful to the voice. She also prescribed a regime that included steam for humidifying his vocal cords, more water and more rest.

"I love talking shop and working with people who use their voice and acting skills to create art for an audience,'' she says.

And for Daniel, the therapy was so successful that in May of this year, he returned to the clinic - with nearly the entire APT company.

It was a remarkable gathering, says Brenda DeVita, APT's associate artistic director, in part because she's never seen so many actors show up for an optional event at 8am on their day off. But also because some performers are loath to admit they're having voice problems. It is akin to an NFL running back owning up to a bum knee.

"For a lot of performers, there's a stigma,'' DeVita says. "They're afraid that if they admit they're having problems, the director will say, ‘If you can't hack it, we'll find someone who can.'"

The 30 actors spent the morning at the hospital, learning the myths and truths of caring for their most precious instrument. Then they each had a laryngeal endoscopy, a video of their vocal folds, so that if problems develop later, they'll have a baseline for comparison.

Dr. Dailey, a UW Health voice surgeon who trained with the Boston surgeon who recently did the singer Adele's surgery, took the group through the medical management of voice problems. In addition, they learned that some home remedies, such as menthol and lemon juice, can actually cause more problems. And that others, such as inhaling steam and drinking a lot of water, do help.

For some, like actor Travis Knight, seeing a video of his vocal cords was an epiphany.

"I realized that just about everything I do - staying up late, eating greasy foods, drinking too much coffee - is bad for my voice,'' says Knight.

He showed up at practice a few days after his visit to the clinic, lugging a gallon of water to a rehearsal to choreograph the fights in "Richard III." Others say it is just a relief knowing that if they begin to have problems, they know where to get help.

So at the end of this summer's "Richard III," when actor James Ridge, as the dastardly king, is finally finished off at the battle of Bosworth Fields, listen when he cries: "A horse, a horse, my kingdom for a horse."

You will be able to hear him perfectly.

Why? Because he won't be hoarse, of course.