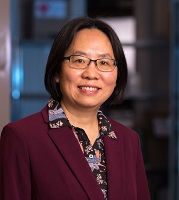 Attacking cancer cells with anti-cancer drugs is one of the best tools in the fight against cancer. However, many promising anti-cancer treatments – from chemotherapy to gene therapy – have not been pursued clinically due to their low treatment efficacy and high systemic toxicity.

Engineering professor and UW Carbone Cancer Center member Shaoqin Sarah Gong, PhD, has thus focused her research on the field of nanomedicine, in which she is working to more safely deliver a variety of drugs to treat cancer, heart disease and even blindness.

“We engineer nanoparticles to deliver all sorts of payloads for medical purposes, including small molecular drugs, proteins, DNAs, RNAs, and CRISPR-based genome editing agents, and so on,” Gong says. “They allow the delivery of drugs more specifically to the target organ or cells while enhancing their stability during circulation in the bloodstream.”

“Also, we’ve designed the surface of the nanoparticles such that they can be functionalized by incorporating various moieties such as cancer-cell targeting molecules,” Gong says. “Because most cancer cells overexpress certain types of proteins on their surfaces, the targeting molecules attached on the surface of the nanoparticle can interact specifically with the protein overexpressed by the cancer cells, leading to cancer-targeted drug delivery.”

Imaging probes can also be incorporated, so that researchers, and eventually clinicians, can monitor if the nanoparticles are reaching the tumor while avoiding healthy tissues.

Most nanoparticle research currently being conducted uses particles made up of multiple molecules, but a concern is that they do not have adequate stability in the bloodstream and can lead to premature release of the payloads and loss of their targeting specificity. Instead, the Gong lab is focusing on engineering “unimolecular” nanoparticles.

“Our nanoparticles are unique because they are formed by one single molecule, and thus are much less likely to fall apart during circulation in the bloodstream,” Gong says.

Gong collaborates with researchers throughout UW Carbone and campus to tailor the nanoparticles for different uses. For example, she recently worked with Wei Xu, PhD, to develop a nanoparticle to deliver drugs to a form of breast cancer known as “triple negative” (TNBC). Unlike many forms of breast cancer, TNBC patients cannot be treated with targeted therapies. As a result, these patients have a higher risk of recurrence and poorer overall survival compared to other forms of breast cancer.

TNBC cells often overexpress a protein on their surface, called EGFR. Gong and Xu asked if they could use EGFR as a target for drug-delivering nanoparticles – but importantly, their delivery would not inhibit the function of EGFR, thereby reducing the risk of resistance.

“Aminoflavone is an investigational drug from the National Cancer Institute with potent anti-cancer activity, and Wei Xu was interested in using it as a therapy for triple negative breast cancer,” Gong says. “However, several clinical trials of the drug were terminated partly due to systemic toxicity.”

Aminoflavone, then, was a perfect candidate for Gong’s nanoparticles, where they could deliver harmful drugs to cancer cells while shielding healthy cells from exposure. Gong engineered nanoparticles in the lab that sheltered the drug and included EGFR-targeting chemicals to deliver the drug more efficiently to TNBC cells. Then, they tested the nanoparticles in a mouse model of TNBC.

“We saw the targeting nanoparticles were taken up with high specificity by the cancer cells, and tumor sizes were reduced significantly,” Gong says. “And we did several toxicity studies, finding no significant difference between mice given the aminoflavone in nanoparticles and mice not given any drug.”