Madison, Wisconsin - We all know the cliché; there is no "I" in team. It's a hard-to-dispute truth, both literally and figuratively. And while true, it doesn't mean that individuals can't excel within a team setting.

The peer-nominated awards were created to recognize those who demonstrate exceptional skill in clinical practice or education and their commitment to the mission, vision and values of UW Health. 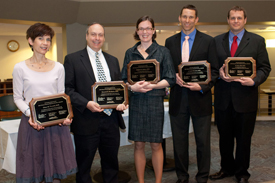 Modesty, while not a requirement, came in abundance among all the winners.

"It's really an unexpected honor to win this award," said Dr. Abel. "This is really a team award and I'm really excited to get to work in such a great environment. Caring really makes a difference; it's really an honor and a privilege to get to work with so many talented people."

Dr. Abel was the first to accept his award and his sentiments were echoed and amplified throughout the ceremony as his colleagues accepted their awards.

"Taking care of children with cancer is a real team effort and I couldn't ask for a better group of colleagues to work with on a daily basis," said Dr. De Santes. "UW Health really promotes an environment of clinical excellence and compassionate delivery of medical care and I feel fortunate to be part of it."

As these six award winners prove, while there isn't an "I" in it, being on a team doesn't cap an individual's potential to excel. In fact it seems more likely that individual excellence is the beneficiary of excellent teamwork

"If it were not for the strong relationships inherent in our patient care teams," said William Schrum, vice president of human resources at UW Medical Foundation,"none of our patient outcomes would ever be as extraordinary as they are right now."

The Rising Star Physician Excellence award was designed to recognize a physician who is both an outstanding clinician and educator and has demonstrated exceptional and measurable contributions to clinical practice in their short tenure here at UW Health. Despite their limited tenure, their contributions are already so significant that they suggest an exemplary career trajectory. This year, three physicians were chosen as Rising Stars.

In the short time Dr. Jason Abel has been a urologist at UW Health, he has become a nationally recognized specialist in the management of renal cell carcinoma. He has already created 16 publications and had 40 published abstracts.

In 2010, he received the Merit Award from the American Society of Clinical Oncology Genitourinary Cancers Symposium. And in 2011, he received the Poster of Exceptional Merit award at the American College of Surgeons Annual Meeting. Dr. Abel was also awarded the Wear Teaching Award in 2011, after his first year on faculty. This honor is awarded by the residents for the faculty member they believe has made an outstanding contribution to their education.

"Dr. Abel is also well-known for his ability to work with other clinicians and provide terrific care for his patients," said Donna Katen-Bahensky, UW Hospital and Clinics President and CEO. "He is incredibly warm and genuine and this greatly facilitates collaboration and communication with others leading to optimal patient care and outcomes."

Dr. Toby Campbell's role as a member of the Carbone Cancer Center is really two separate roles. He is a leader in the Palliative Care service and also has a robust clinical practice in lung cancer. He is a steadfast proponent of evidence-based, data-driven use of chemotherapy and targeted therapy in lung cancer.

Dr. Campbell is also known for his practice of unmatched patient-centered care and has made a truly profound contribution to UW Health with his tireless efforts to develop and expand palliative care services. In addition to substantially raising the visibility of these services, Dr. Campbell has spearheaded efforts to establish a top-notch palliative care fellowship program.

"In his short tenure at UW Health, Dr. Campbell has emerged as a critically important and valued colleague," said Katen-Bahensky. "His clinical activity embodies the mission components of service, scholarship, science and social responsibility. He is a credit to the cancer center, to the hospital and to the University of Wisconsin."

Dr. Meghan Lubner's incredible attention to detail, ability to be inclusive and communicate effectively with everyone on her team - from technologists to nurses to other physicians - her impressive clinical acumen and encyclopedic knowledge have helped her become a "go-to" radiologist early in her career.

"Dr. Lubner is perhaps best known for her extraordinary commitment to patients," said Dean Robert Golden, UW School of Medicine and Public Health. "She is internally driven to do everything in her power to ensure patients receive the absolute best possible care."

The Clinical Educator Physician Excellence Award recognizes an outstanding educator with an emphasis on teaching residents and medical students along with other interdisciplinary team members, patients and families. Dr. Diane Puccetti is this year's recipient.

Throughout her career Dr. Puccetti has shown incredible dedication to teaching both medical students and residents and has consistently earned the highest teacher ratings from students across all four years of medical school. She is praised for her willingness to give students constructive feedback, to role-model the delivery of news to patients, to teach clinical care of critically ill patients and to involve students in all aspects of the patient-care team.

Clinical Practice Physician Excellence Awards are given to recognize an outstanding clinician who demonstrates an extraordinary commitment to patient- and family-centered care. This year two awards were given to deserving physicians.

Dr. Kenneth B. De Santes is the Clinical Director of the Pediatric Hematology/Oncology program, and Director of the Hematopoietic Stem Cell Transplant program at the American Family Children's Hospital.

In his time at the hospital, his leadership of the pediatric bone marrow transplant program resulted in the incorporation of the mechanisms of immunotherapy into standard clinical bone marrow transplantation. This enabled UW to become one of only a handful of sites in the country to provide 131 I-MIBG treatments for children diagnosed with high-risk and refractory neuroblastoma.

"I am delighted to present Dr. Kenneth B. DeSantes with one of the 2012 UW Health Clinical Practice Physician Excellence Awards," said UW Medical Foundation President and CEO Dr. Jeffrey Grossman. "In addition to his many successful clinical and research leadership roles, he continues to receive rave reviews in both his Press Ganey and Avatar scores from his patients and is highly regarded by his colleagues and the fellows and residents he works closely with."

Dr. Louis Hinshaw is an associate professor of radiology in the abdominal division of the University of Wisconsin School of Medicine and Public Health where he is also the Chair of the Residency Selection Committee.

Dr. Hinshaw's outcomes at UW Hospital and Clinics are far beyond the medical literature. He has the lowest published bleed rate after liver biopsies, the lowest recurrence rate in the literature for liver tumor ablation and one of the lowest pneumothorax rates for lung biopsies, despite treating some of the sickest patients.

"Dr. Hinshaw is simply an extraordinary clinician," said Dr. Grossman. "He is the 'physician's physician' - the doctor that other doctors want to rely on to take care of them and their families."