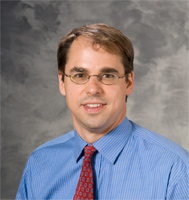 When breast cancer spreads to other parts of the body, long-term survival tends to be the exception and not the rule.

While there are many factors at play, the median survival of patients with metastatic breast cancer measures just a few years. But, despite the odds, some go on living for many more.

In rare cases, some even go on to live for decades.

Burkard, a medical oncologist and researcher at the UW Carbone Cancer Center, is the principal investigator of Outliers, an ongoing international study that’s looking for “extreme survivors” of metastatic breast cancer – people like Peg, a patient who set Burkard on his current course.

Peg initially was diagnosed with breast cancer in 1978, treated, then received word years later that the cancer has spread. While the odds may have been against her, Peg kept trucking along. By the time she had met Burkard many years later, she had outlived her original oncologist.

“I’d just heard about patients like Peg, but actually meeting her made me want to understand what was different about her,” Burkard said. “I thought it was important to identify others like her and try to figure out what makes either the person tick or the cancer tick.”

For the study, extreme metastatic breast cancer survivors are defined as those who have lived for more than 10 years since their initial cancer diagnosis. While the study seeks to identify those individuals, it’s also looking for participants who could become extreme survivors, as well.

So far, more than 700 individuals from across the country and the world have been surveyed as part of Outliers. But, with a goal of 2,000 participants, Burkard needs your help.

If you’re over 18, have received a breast cancer diagnosis, and have been diagnosed with metastatic disease, you are eligible to participate.

Qualified participants are asked to take a survey that includes questions about medical history, diet and lifestyle. From there, some extreme survivors are selected for further analysis of tumor and saliva samples, with an emphasis on studying genetic makeup. “One of the ideas was maybe it’s the genes in the tumor that’s driving how fast these cancers change over time,” Burkard said.

Burkard also noted that he sees two ways this research could benefit patients. The first has to do with a possible correlation between certain lifestyle choices and long-term survivorship. “If it were a habit or something that’s modifiable, we could share that with other people who are living with metastatic breast cancer, who could then deploy those strategies,” he said.

Results from the study could also help oncologists better identify patients with slow-growing cancers, and as a result, select more appropriate treatments. “If we could identify people with metastatic breast cancer and say, ‘oh, you’re one of the people for whom the cancer grows so slowly that you’re likely to outlive your cancer,’ then that person may clearly be able to forego chemotherapy, for instance, and focus on other treatments that are less toxic,” Burkard said.

Some preliminary results from the study are already available, made possible by UW researchers and the more than 700 individuals who have already taken part in the study.

Interested in participating? The first step is to visit the Outliers webpage and take an eligibility survey. Men who have breast cancer are strongly encouraged to participate.