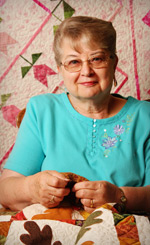 MADISON - Caroline Smith knew immediately the pain she was experiencing was not simply motion sickness.

Riding a train back from a vacation in Reno last February, Caroline began feeling sick and experiencing diarrhea and vomiting. Then she experienced a sudden twisting pain between her shoulder blades.

Caroline was experiencing a heart attack. Luckily, as a member of the Monona Quilters group, she had attended a January speaker session in Monona, Wis.,  featuring the Go Red for Women campaign. At the meeting, Go Red advocates Helen Martin and Deb Loughrin explained the causes and symptoms of heart attack and stroke and how to prevent heart disease.

Because she was able recognize her symptoms, Caroline is alive and well today.

"If I hadn't been at the Go Red meeting, I would have never guessed I was having a heart attack," Caroline says.

Caroline alerted her husband, and by the time the couple arrived in Denver, paramedics were waiting to rush Caroline to the hospital. When she arrived, she was whisked into the emergency room, where doctors determined she had a 100 percent blockage in one of her arteries. She quickly received a procedure to place a stent to open her blocked artery.

"Because of the time lapse that I had no control over, I have some heart damage," says Caroline. "But with a 100 percent blockage, I'm lucky I made it to the hospital. I think I was probably knocking on death's door and not knowing it."

Women's Heart Attack Symptoms Often Differ from Men's
Caroline says that prior to attending the Go Red presentation, she was completely unaware of the differences between heart attack symptoms for men and women. While men often experience classic chest pain and shortness of breath, women often experience symptoms similar to Caroline's—nausea, dizziness and gastrointestinal problems. Caroline's husband experienced a heart attack in January 2007, but that knowledge hadn't prepared her for what she experienced.

"I had none of the classic symptoms," says Caroline, who's now under the care of UW Health cardiologist Karen Moncher, MD. "And I had no warning ahead of time." 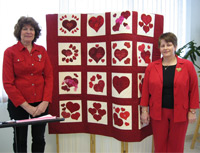 That's great news to avid quilter and UW Health nurse Helen Martin, who has made it her mission to help make women aware of their own risks for heart disease. Women's symptoms may be subtle and differ greatly from person to person, so Helen reminds the quilting groups she addresses - and every woman she meets - to learn to recognize and identify any changes in your body.
Helen and Go Red volunteers stress that women should never feel embarrassed to call for help if they think they might be experiencing heart problems.

"I'm elated that Caroline did go and get help," Helen says. "That kind of feedback just motivates us to do more."
NOTE: *Symptoms vary from person to person. It is possible that a person will not experience any of the above symptoms.