The young patients of the hospital gathered in the lobby to greet him as he arrived. They included 20-month-old Gabi Collier of Rockford, Ill. She had just finished chemotherapy treatment and was patiently waiting for Santa’s arrival with her mother, Jill Collier.

"[These visits] are good for the whole family," Collier reflected as Santa stopped to speak with every family individually.

Even shy children looked on with anticipation as Santa took a seat surrounded by the families. Santa’s elves – volunteers from Madison Firefighters Local 311 – got the festivities into full swing by leading rousing renditions of favorite Christmas carols, including Rudolph the Red Nosed Reindeer and Santa’s favorite, Frosty the Snowman.

Santa, with a little help from the American Family Children's Hospital nursing staff, knew every child’s name, hometown, even items on their Christmas lists as he called them up to his seat one-by-one to give them a present provided by Local Firefighters 311 Charities. Three-year-old Dora Crookshanks from Janesville, Wis. couldn’t wait. She hoped there just might be a doll among the presents in Santa’s sack.

Santa’s visit, like many of the special visitors to the American Family Children's Hospital, provided a much-needed break for families. Dora’s mother Tammy Crookshanks commented, "They help patients get their mind off of things." 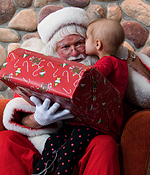 While this marks the 47th year that retired firefighter Dick Lindauer has visited kids as Santa, the role of Santa has a long tradition. Dennis Lindl, one of Santa’s elves and a member of Local 311, actually recalls when Santa (then played by a different member of the Madison Fire Department) visited his brother who had muscular dystrophy.

"Back in the mid-50s they used to take the kids to one of the local halls where they would visit," he said.

It wasn’t until Lindauer took over that the tradition of visiting the kids in the hospital actually began. He plans to keep going until he celebrates his 50th year as Santa. Then it will be time for another to take over.

"Those will be big boots to fill," said Gary Schreiber, another elf and also a member of Local 311.

In the meantime, Lindauer and his fellow firefighters will continue to bring a little joy even to the smallest patients. As Crookshanks said, "They’re just awesome."