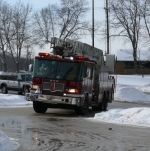 MADISON – Preceded by elves with sacks full of gifts, Santa arrived by fire truck at the American Family Children's Hospital in Madison, Wisconsin.

Patients gathered in the lobby of the hospital to greet Santa as he arrived. He stopped and spoke with each child as he made his way to the seat reserved especially for him.

The elves were all volunteers from Madison's Local Firefighters 311, a union of firefighters and EMS from Madison, Monona and surrounding communities. The Firefighters 311 raises funds for different causes throughout the year, including gifts for the patients eagerly awaiting an opportunity to visit with Santa. They sponsored the visit.

After several rousing Christmas carols including "Santa Claus is Coming to Town," Santa began to hand out presents. With a little help from nurses and child life specialists at American Family Children's Hospital, Santa knew every child’s name and interests.

One little boy, Austin Schute, could barely sit still as he waited with his twin brother Bryce. Their mother,

Roxanne, said they were so excited to see Santa, they just couldn’t wait. When Santa finally called their names, they each gave him a hug after receiving their presents.

Rick Mulhern, one of Santa's elves and a member of Firefighters 311, said it is the kids' appreciation and excitement that continues to draw volunteers each year. "It's just such a great feeling to be a part of this."

Mulhern commented that there were even five retired firefighters among the elves. They keep coming every year because the kids are always so amazing. Mulhern is with Fire Station Number 8, while the other volunteers were from stations across Madison.

Another volunteer, Karen Thompson, is a personal friend of Santa's and was helping for the first time.

"It's just awesome to be a part of this," she said. "I hope to keep coming back as long as Santa does."

Santa is actually retired firefighter Dick Lindauer. He has been visiting kids at area hospitals, including American Family Children's Hospital, for 48 years. He plans to keep going for at least another two years.

As they prepared to visit with at least 50 more patients who weren't well enough to come down to the lobby, Mulhern concluded, "It means so much to all of us to be able to bring joy to these kids."
Photos: Top - Santa arrives by fire truck. Right - Santa visits with the Bryce and Austin Schute
Date Published: 04/30/2009