Rewriting the Health History for Generations of One Family

Rewriting the Health History for Generations of One Family 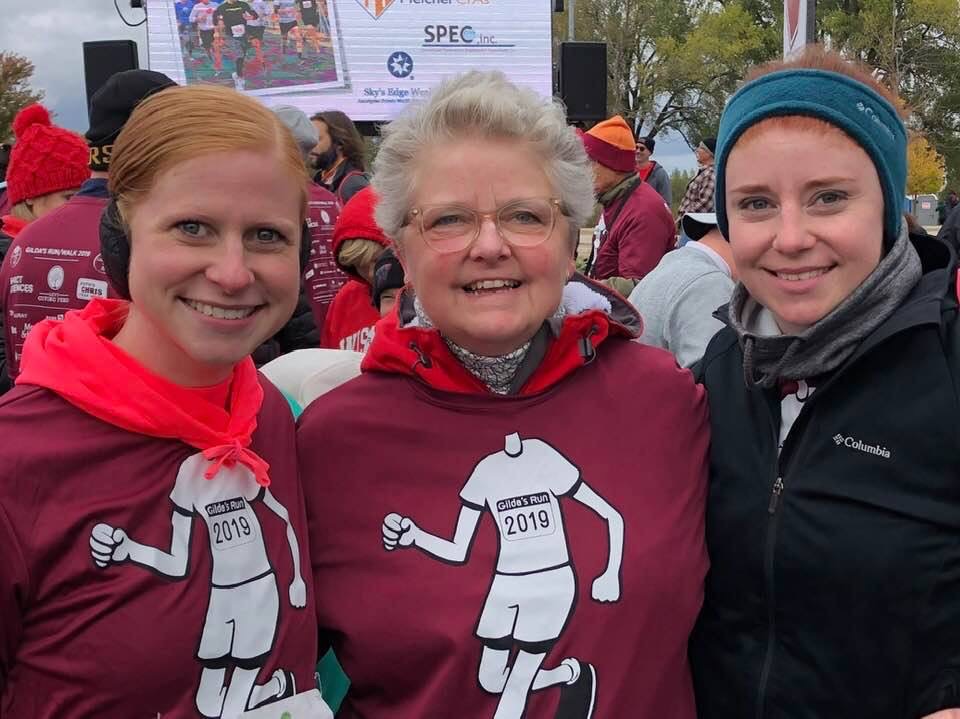 One day in August 2018, Sue Krueger made a phone call that saved her life and rewrote the health history for generations of her family.

She had been feeling off for weeks: bloating, a nervous stomach, a weird pain between her shoulder blades. So, she called UW Health Union Corners Clinic, hoping for an appointment that day. The nurse who took her call, Amy Weiler, listened intently, and asked a series of questions. Then she asked some more questions. Finally, she told Krueger to go to the emergency department at UW Health at the American Center.

There, a CAT scan uncovered a five-centimeter mass on her left ovary. After a complete staging surgery, results showed that Krueger had stage one ovarian cancer.

“I really feel that I dodged a bullet,’’ Krueger says. “If Amy hadn’t truly listened to me that morning, I would still have – and be unaware of – a malignant tumor growing and changing into its next stages inside of me.”

Instead, she was diagnosed at a stage when ovarian cancer is most treatable. Her oncologist and surgeon, Dr. Lisa Barroilhet, says “it’s pretty unusual” to see a patient diagnosed at this early stage.  Most patients don’t learn they have the disease until the cancer has spread to other parts of the body, meaning they are stage three or four.

Krueger already had a full life that fall. Daughter Kate was about to get married and daughter Beth was expecting her second child.  Krueger was thankful to Barroilhet for timing her chemotherapy so she could be feeling well and “fully present” both at the wedding and when daughter Beth delivered a grandson a few weeks after that.

Next, Barroilhet referred Krueger to the genetic counselors at the UW Carbone Cancer Center Oncology Genetics Clinic because about 15 to 20 percent of ovarian cancers are caused by mutations in genes that can be passed down from generation to generation in the same family (BRCA being the most common).  When BRCA genes, which everyone has, are working correctly they prevent cancer by suppressing tumors when cancer arises in the body. But about one person in 400 has a mutation in these genes, usually a BRCA1 or BRCA2 mutation, that keeps them from repairing DNA normally when cells are dividing, which can allow cancer to grow unchecked.

Krueger did test positive for a BRCA2 mutation and knew that her maternal grandmother had breast cancer and later died of ovarian cancer. In working with counselor Kelcy Smith, Krueger found 16 relatives on that side of her family who had breast, ovarian, pancreatic and melanoma cancers. (While the mutant gene was named BRCA2 for Breast Cancer, it is now known to drive those four cancers as well as male breast cancer and an aggressive form of prostate cancer.)

“No one ever connected the crazy cancer dots for us before,’’ Krueger says. She’s shared an explanation of the test results and potential risks with members of her family, suggesting they also be tested. Her children have a 50 percent chance of having the gene and have also undergone genetic counseling and testing. Other family members haven’t been interested, something Barroilhet says isn’t unusual. “Sometimes people aren’t willing to be tested, because they’re afraid to know the results.’’

Still, there is some good news for people whose cancer is caused by BRCA mutations, according to Barroilhet.

“It’s a really exciting time because we have this new class of targeted therapies that work especially well on BRCA-driven cancers,’’ Dr. Barroilhet says. These drugs, called PARP inhibitors, are already approved for recurrent ovarian cancer and pancreatic cancer and are in clinical trials to treat metastatic prostate cancer and triple negative breast cancer. The drugs are given in the pill form.

Krueger attended a talk on “Hereditary Ovarian Cancer Syndromes” given by Dr. Lisa Barroilhet in September, which outlined the new research and treatments for the hereditary version of the disease.

“I had been worried about my cancer coming back,’’ Krueger says, “but after I went to Dr. Barroilhet’s talk, I thought, ‘This is going to be okay.’"

Do I need cancer genetic counseling?

In 2019, the National Comprehensive Cancer Network (NCCN) updated its guidelines to say that many more people should be tested to see if they have a cancer-causing gene.

NCCN now encourages all people of Eastern European (Ashkenazi) Jewish heritage consider being tested for three cancer-causing mutations that are more common in their families. In addition, current practice at UW Carbone calls for anyone with pancreatic and ovarian cancer be tested, in part so that family members can know if they are also at higher risk for these conditions.

“We’re casting a much broader net when it comes to who we think should be tested,’’ says Peter Levonian, the head of counseling at UW Carbone’s Oncology Genetics Clinic.

Knowing that you have a gene that is linked to cancer can help on several levels, Levonian says. It informs people that they need more careful screening, possibly at an earlier age than others. It may also guide treatment decisions.

Here are some things that Levonian says people should consider when deciding whether they should be tested: